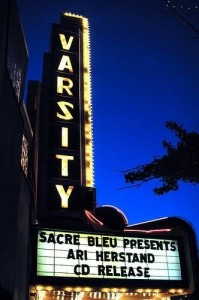 The night of your CD release show should be the biggest music performance of your career to date. If you’ve done your job right, the show will be packed if not sold out. The reason more people typically come to album release concerts than your Wednesday night four-band bill show is because it’s an event – and should be hyped up as one.

How I got 250 to my debut CD release show was I promoted the bajeebers out of it for months leading up to it. Having a packed club with people there actually to see YOU is something that won’t happen very often early on, so you have to make sure you go about this right.

Look the Part
This is the revamp of your band and your image. It’s the new beginning of what this new album represents. This is the album that will propel you to the next level. All the work you put into the production of this album should be represented on how you present the entire evening: beginning with how you look.

Ladies typically understand the importance of caring about how they look on stage, but dudes generally do not for some reason. So this goes out to the dudes, especially: dress UP. You don’t need to dress up like you’re going to a wedding or fancy dinner, but dress UP from what you normally wear or perform in. This is a very special event for your band so treat it as such. Maybe coordinate a hot look with all the members of the band or everyone gets new hair dos or something. Just make sure you look like you belong on that stage.

Pimp out the Venue
Pick a venue for your CD release that will allow you to take some liberties in a redesign for the night. Nothing drastic, but maybe set up a photo booth (with costume accessories available of course!) with a full backdrop of your album cover, and have a friend of yours promote his photography business by taking photos for free that night, and have her stamp each photo with her logo. Then upload these photos to your Facebook Page and tell everyone to go find them there and tag themselves.

Put up the show’s posters all around the venue in a classy fashion. This is YOUR venue for the night and it’s YOUR show. Make it feel that way from the moment people step into the place. Maybe even have a greeter at the door handing out mini Altoids tins wrapped with a string that has the album name on it.

Revamp Your Merch
The majority of the people at your CD release show will most likely have seen you perform before. If you’re like most local bands, you have performed hundreds times around town over the past couple years, with a handful of people at each – who then felt they didn’t need to make an effort to come out again because you play all the damn time and they’ll “catch the next one.”

Chances are they’ll remember the merch display you had and the T-shirt designs. Revamp everything this night. You should order all new merch that represents the new album. Build a new merch display, make it BRIGHT, and put it in a very prominent place of the club. Make sure you have sellers there from the moment the doors open to the moment everyone leaves.

You will a larger amount of merch than normal at this show, so be prepared for that. Push the merch from the stage and talk about unique merch items you have for that night only (limited screen prints of the poster/album cover, customized chocolate bars, thongs, whatever). Announcing the cool merch items from the stage will drastically increase sales. And remember, people spend $5 on coffee and $7 on a Jack and coke every day. Don’t be afraid to sell them seemingly frivolous, impermanent items (like branded chocolate for $3). They are there for the experience and buying your stuff is part of the experience. Give them lots to buy!

Give Away Merch
One fun way to get everyone to know what you have for sale at the merch table is to showcase it in front of them by giving it away throughout the show. Don’t throw it off the stage and invite a wrestling match, host a raffle with door prizes. To promote advance ticket sales, let everyone know that if they buy tickets in advance, they will be thrown into the raffle for free special merch items only available at the show. Run Facebook or Twitter contests to promote the show and everyone who does this gets thrown into the raffle as well. Then on stage in the mic, call out there names and have them come up to the stage to claim it and show off what they won.

Do not schedule the CD release show until you are holding the replicated CDs in your hand
This is the most important rule concerning your CD release! I can’t tell you how many horror stories I’ve heard of bands jumping the gun on scheduling the CD release show when they may have only just begun the recording process, and recording runs long, and then they frantically try to get the CDs rushed to them, and then UPS missed the delivery, and they have to drive seven hours to pick up the discs in New Jersey the day of the show.

The album recording process inevitably takes MUCH longer than you’ll anticipate, so you can never gauge when it will be finished… until it is. Even if the album is mixed, sometimes it takes months to go back and forth with mastering to make sure you get exactly what you’re looking for. Even if you have the master in your hand, sometimes the replication process takes a bit longer than you planned for – and you can’t make up for all the lost time in the manufacturing process.

This album will be around forever so don’t rush the process and push out an inferior product just to get it in time for the release show.

Make it Memorable
Make sure everyone walks away from this show buzzing about the experience. You want them to talk about it to their friends for weeks. You want this show to stand out amongst the hundreds of local shows happening around yours. The more buzz you have from the release the more people will go on iTunes and Spotify and check out the new album. Putting on a great concert is one thing, making the entire evening an experience is what makes it truly memorable.

Since quitting his day job at Starbucks in January 2008, Ari Herstand has played over 500 clubs, colleges and festivals in 40 states, opened for Ben Folds, Cake, Eric Hutchinson, Matt Nathanson, Joshua Radin, and Ron Pope, and had his music featured on popular TV shows like One Tree Hill and various Showtime and MTV shows. Ari relocated from Minneapolis to Los Angeles in the fall of 2010 to begin the next phase of his artistic journey. This year he landed two co-starring roles on 2 Broke Girls and TOUCH, as well as a lead role in feature film. Check out his independent music business advice blog, Ari’s Take.

One thought on “Make your CD release gig a special night”