CD sales are one thing, but make it easy when you give away your
music on CD

There are lots of reasons to love a CD. I, for one, enjoy getting a physical disc, browsing the liner notes, reading the credits of the string players on track 8 (who aren’t credited on iTunes downloads), and using one more of my senses (well, two if you count the smell of paper and plastic) during my album listening experience. 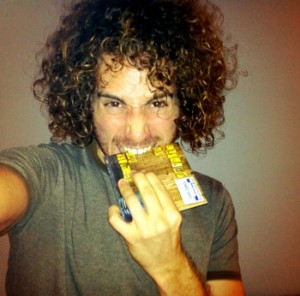 For any independent artist, hand-to-hand CD sales are necessary. I make the majority of my album sales at my live shows in the form of a CD (not a digital download card or a vinyl record). Buying my CD live is one part “I want to listen to this,” one part “I want to listen to this in my car on the way home” and two parts “I want to have a moment with this artist who I just enjoyed the live show and get him to sign it.” It’s the same kind of moment they want to have buying you a drink; however, this moment they’ll actually walk away with some music.

No social network or YouTube video can change the electrifying energy of a physical experience.

When you have a new album out, you most likely will want to give a certain amount away to people that you think could potentially help your career. Be it a venue owner, a booking agent, a record company exec, a radio DJ, a newspaper journalist or your rich uncle. To get these people to actually listen to your album is much more difficult than you expect, and it’s not always just because they’re “too busy.”

When I’m on tour I get handed a CD nearly every other night. However, they almost always give me their CD shrink wrapped. The mental effort it takes to battle with a shrink wrapped CD way outweighs the actual time and effort it will take to unwrap it (10-300 seconds depending on the length of my guitar nails at the moment). In your mind you have thought this out: “It’s more professional if I give them my CD shrink wrapped. It looks like I’m a legitimate artist. They’ll enjoy unwrapping it – like a present!” This is wrong on all accounts.

Always unwrap your CD before giving it away!
This includes mailing it to a radio station or newspaper reviewer or giving it to a fellow musician at a show. If you want them to listen to it, remove as many steps as you possibly can from the equation. If you give someone your disc at a show all they should have to do while driving home is remember they have it and with one hand on the wheel slide the disc out from it’s case and pop it into their CD player (you don’t want to cause them an accident do you?). The same goes for the journalists getting your disc in the mail. They see five discs on their desk. four are shrink wrapped and one is not. Which disc do you think they’re going to start with?

When I finish my tour I have about 30 shrink wrapped CDs cluttering up my car that I eventually throw away and two burned demos and three actual released CDs that were given to me unwrapped and have been in rotation in my car throughout the tour.

One last note – this is only for giving away CDs to people you really want to listen to them (industry folk, radio, press, other musicians, etc). This does not apply to CD sales at shows. I always keep my CDs wrapped when I sell them, it’s almost fun for people when they purchase them to unwrap it.

Since quitting his day job at Starbucks in January 2008, Ari Herstand has played over 500 clubs, colleges, and festivals in 40 states; opened for Ben Folds, Cake, Eric Hutchinson, Matt Nathanson, Joshua Radin, and Ron Pope; and had his music featured on popular TV shows like One Tree Hill and various Showtime and MTV shows. Ari relocated from Minneapolis to Los Angeles in the fall of 2010 to begin the next phase of his artistic journey. This year he landed two co-starring roles on 2 Broke Girls and TOUCH, as well as a lead role in feature film. Check out his independent music business advice blog Ari’s Take, follow Ari on Twitter,and on Facebook, and sign up for Ari’s Take newsletter.

Read More
Should You Give Your Music Away?
9 Quick Tips to Boost Gig Sales
11 Reasons Why A CD is An Indie Artist’s Best Friend
CD Sales Are Up On CD Baby
11 Ways to Increase Your Sales on CD Baby