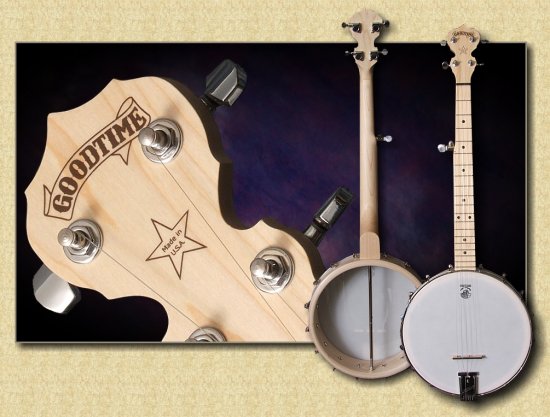 This post originally appeared on the Deering Banjos blog as “How Banjos Work.” Reprinted with permission.

Banjos offer acoustic power, responsiveness to any kind of touch, brightness that can cut through the sound of an ensemble, warmth and richness to accompany voices and other instruments, and a tone character that is completely unique in the world of musical instruments. But how does all this happen?

The vibrating membrane
The thin, drum-like head of the banjo creates the popping, snappy sound of a banjo. This membrane, activated by the bridge and strings, responds quickly because of its thin, sensitive, easily responding nature. A guitar sound board can be around 1/8″ thick, with spruce braces almost 1″ tall and a bridge about 1×6″ and almost 3/8″ thick.

A plastic banjo head is around 12/1,000″ thick, stretched over an open 11″ braceless expanse, with a bridge that is about 1/8″ thick at the bottom, 5/8″ tall and only 2 1/2″ long. Yes, there is more to the banjo than just the tight drum head and light, slender bridge, but this illustrates some of the mechanical differences between a guitar and a banjo. Because the guitar top is so much thicker and braced to carry to the load of heavy guitar strings, and banjos have a thin membrane that makes its soundboard – or sounding member – the guitar is naturally softer and mellower than the snappy sparkle of a banjo.

The banjo’s thin membrane head, like an ear drum, is one secret to the expressive nature of a banjo. The lightest touch of a finger on a string makes a beautiful, delicate, musical sound, while a strong attack on the strings makes a powerful, driving tone. This kind of dynamic response is one of the most gratifying aspects of playing a banjo.

But what about the effect of all the stuff on a banjo, like the tone ring, the tailpiece, the various flange designs, the effect of the neck wood and the adjustments like head tension, type of head, etc.?

The rim
The rim of the banjo is the part that the head is stretched over. The world’s best banjos all have rims made with three plies (layers) of maple. The rim is THE heart of the banjo. (Deering banjos use only the absolute finest violin maple for the Goodtimes, Deerings, Eagles, Vega, and Tenbrooks lines.)

The tone ring
When a resonant ring of some kind of bell metal (the metals used to make bells) is mounted to the top of the rim, so the head is stretched over the metal ring, that ring is called a tone ring.

A properly made, correctly fitted tone ring expands the banjo’s tone character. The correct fit of the tone ring means the rim and the tone ring vibrate as one, without either part stifling or restricting the other. The bell metal tone ring (and some wood tone rings) increases the brightness AND the bass response in a banjo’s tone. The sound becomes bigger or richer and fuller. When the banjo is properly constructed with a good tone ring, the tone actually becomes clearer, with more precise edges to the sound.

The tone ring is an enhancement to the wood rim. A wood rim without a tone ring has a pronounced “mid-range” sound; not super bright, not super deep. This sound is considered desirable for many styles of music. Clawhammer players like this warm, mid-range sound, reminiscent of old recordings of early banjoists.

Fingerpicking banjoists tend to like banjos with fairly heavy, bell metal tone rings. This enhanced bass and treble response helps make the banjo feel more responsive when just using fingers to strike the strings. Clawhammer style uses more wrist and arm so the technique has more physical energy (from the bigger muscle groups used) so a softer sounding banjo can still be played with broad dynamics.

Tonal wood
The wood used in the neck of the banjo, definitely affects the color of the banjo’s sound. Mahogany is the softest of the hardwoods and makes the sound warmer, softer and sweeter.

Maple is a harder, denser wood which makes the banjo sound brighter and a little less bass. The harder neck also increases the dynamic response, meaning the banjo has a little more breadth of expression than the softer mahogany.

Walnut is in between the mahogany and maple, brighter than mahogany but warmer or sweeter than maple.

Head tension
There are various kinds of banjo heads with their own characteristics, but every head responds to several basic fundamentals. A head that is extremely tight makes the banjo sound snappier or more crisp. A head that is softer sounds a little plunkier or mellow with less sustain. There is a happy medium for most players, where the banjo has some crispness and good sustain with enough warmth to be pleasing (usually accomplished when the head is tuned to just around a G#).

Sustain
Generally, banjos that weigh more sustain their notes longer. Even though the zinc flange of a resonator banjo is toneless or silent, it adds weight to a banjo, and more weight usually mean the strings will vibrate longer.

The resonator
The resonator is a forward sound projector. The sound can’t penetrate the resonator and is focused forward to the front of the player. However, the resonator also encloses the rim of the banjo, so now the sound of the banjo has been changed by the sound being enclosed in a chamber, as opposed to an open back banjo which has no real enclosure other than your tummy.

Creating this sound chamber now has changed the character of the banjo sound. A deep resonator has a slightly darker, more “hollow” sound. A comparatively shallow resonator has less hollowness and the banjo’s response is quicker. Deering makes three different resonator depths to create different banjo tones. Each depth creates a “resonant frequency” of that particular volume of space inside that banjo. Putting a deeper resonator on a banjo that had a shallower resonator has a profound effect on the sound.

Overview
While this is not a scientific presentation, it is intended to show a basic idea of how the banjo works. The rim vibrates, the neck complements the rim, the resonator (if used) enhances the rim and just about everything else needs to be as quiet as possible.

The rim and tone ring are the heart of the banjo tone. The neck is a color added contributor. The resonator depth (or the lack of a resonator) changes the character of a banjo sound. The bridge is a sound conductor that should be carved to the thickness and made of the material that transmits sound the way the player wants it. The head, when stretched to various tensions, transmits the vibrations according to its tightness.