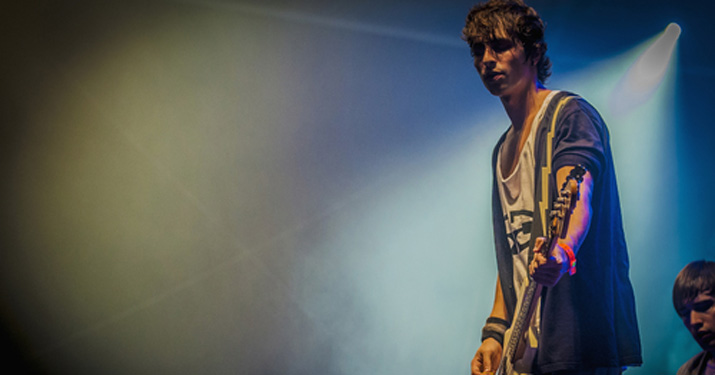 When you perform live, try to see your performance from the audience’s point of view. Why do they audience show up? What are they hoping to get out of the evening?

As musicians, we are emotionally attached to our music. With that attachment, we often lose perspective. I’m not asking you to emotionally detach from your songs when you perform live, but I am asking you to look at it from the audience’s point of view. Why does your audience show up? What are they hoping to get out of the evening? Why do they go to a coffee house, a club, a church, a concert hall? To hear you play your songs? Not really.

Unless you understand the reasons your audience shows up and meet their expectations (dare I say, exceed them?), you will have minimal success and may never truly amaze them with a great live show. The goal is to meet your audience’s expectations without changing who you are.

If you are content being a weekend warrior, making your living from your day job, and simply experiencing the pleasure of playing your music in front of people and having 20-50% of them like it… maybe even once in a while having a magical experience at a show where the spirit falls, the planets align, and you can actually hear the monitors – then this article isn’t for you.

But if you want more out of your shows, if you want to emotionally connect with your audience, generate a buzz from your live show, and make a lot more money when you walk into the building, then you need to dedicate yourself to the process of learning how to put on a great show!

Your audience goes to your show for three reasons: 1) to be captured and engaged, 2) to experience moments, and 3) to have their lives changed in some way. The chances of those things happening by going onstage and “winging it” are not good. Instead, you can focus on what I call the Live Music Method, an ongoing process that includes four steps.

1) The Vision and Planning Stage
To make your show special, you need to think things through and get a vision for what “moments” are in the songs and how to develop them.

For example, I worked with an artist who had a four-minute radio song with a world music feel and sound. Instead of playing it live the way it had been recorded, we developed the themes that were already in the song: a sitar part, a bagpipe part, and an African drums part. It became a huge moment for the group in their show – and at the merch table, bringing in tens of thousands of extra dollars!

2) The Foundation
Audiences are ignorant when it comes to musical things – that’s because most of them aren’t musicians. Your audience doesn’t know why they like you. They just do… or they don’t.

But they understand human behavior perfectly. An audience can sense when someone is nervous or not in control onstage (I call it emotional misdirection when an artist doesn’t know how to lead their audience). On the other hand, confidence, authority, and charisma are all qualities that an audience is attracted to. Who have you seen who exudes confidence and charisma onstage? When an artist leads their audience this way, the audience relaxes, sits back, and goes for the ride!

As an artist, you need to understand the rules of the stage, and how to be creative with them. 55% of communication is what the audience sees. If they see you doing the same thing over and over onstage, even though your songs don’t sound the same, to people you don’t know your songs, they’ll begin to sound the same.

Understanding the concepts of pressure, applause cycles, zone communication, angles, the four ways to get places onstage, and how to use onstage tools to creatively deliver your songs is crucial to keep an audience captured and engaged.

4) Making the Show Your Own
By developing the themes (vocal, visual, musical, lyrical) and your personality in your show, and by creating moments around them, you will have a unique show. And ultimately, a unique show is what you want! It separates you from the pack. You may not sell 50 million records, but you can make a living doing what you love to do.

If you’re a singer/songwriter, you may have a good voice, but it’s not necessarily about your voice. It’s about your personality coming out in songs, and being able to tell the stories to set up the song. (Check out Vince Gill sometime!)

As good as the songs are that Taylor Swift has, her songs are arranged and her show is built around her personality. Do I need to state the obvious? People come to see her!

Many others, regardless of style, have learned the secret of pouring their personality and developing the themes in their songs so they make that emotional connection with an audience.

A great show doesn’t happen by accident. I know we learn every time we’re onstage – but we unconsciously learn bad habits, and the process of learning how to do a great show shouldn’t have to take 20 years onstage!

Image of Edgar Regincos (Amelie) by Anibal Trejo via Shutterstock.com.

Tom Jackson is a world renowned live music producer, author of the book Tom Jackson’s Live Music Method and the All Roads Lead to the Stage DVD series, and master at transforming an artist’s live show into a magical experience for the audience. Tom has worked with hundreds of artists in every genre, including major artists like Taylor Swift, The Band Perry, Jars of Clay, and more. He also shares his expertise as a speaker at colleges, conferences, and events worldwide. To start learning the process of a great live show, check out OnstageSuccess.com.