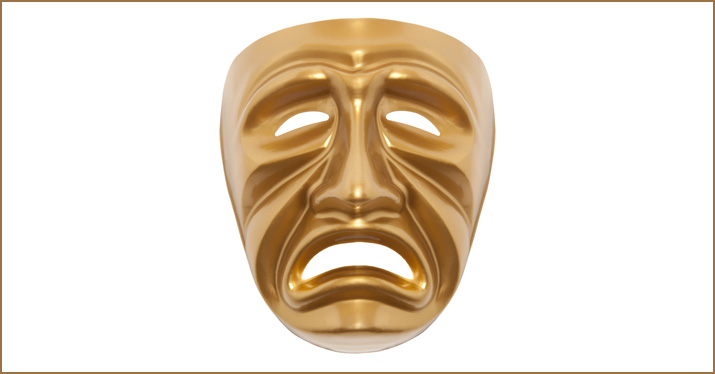 The club is packed, the crowd is stoked, your sound check went beautifully, and you’ve already sold thirty CDs before playing a single note. Everything is going perfectly — so why do you feel like you want to throw up?

Whether you call it stage fright, stage fear, pre-show jitters, or performance anxiety, getting nervous before a show is entirely normal amongst musicians, athletes, and all types of performers. Symptoms can range from the annoying to the incapacitating, and even a small amount of music performance anxiety can transform a gig from a wonderful experience to a painful ordeal. Luckily, there are quite a few resources and strategies to help you amp up the joy of performing and overcome stage fright.

Understand your nerves and think long term
“When musicians get nervous before performing, there are three different things happening,” says Dr. Noa Kageyama, a sport and performance psychologist at the Juilliard School. “There’s the physical response, which can be things like dry mouth, butterflies in the stomach, or a sped up heart rate, and that’s usually disturbing in itself.

“There’s also the mental response, where your thoughts race and the critic in your head starts to go on overdrive. Your attention turns to things you perceive as potential threats, instead of focusing on what you need to be doing right now. You become more aware of extraneous, task-irrelevant details.

“Finally, there’s the emotional response. We feel scared or panicky, like we’d rather be anywhere else than about to play
a show.”

Different techniques and practices can help deal with the different aspects of anxiety, but there’s no magic bullet that will instantly cure all performance nerves. “Dealing with performance anxiety is a skill,” Dr. Kageyama continues. “Like other skills, you have to practice them to get to the level you want to be at.”

Know that you’re not alone
In her book, The Psychology of Music Performance Anxiety, psychology and music professor Dianna Kenny points out that world-class musicians ranging from Frederic Chopin to Sergei Rachmaninoff to Barbara Streisand all suffered from performance anxiety. In other words, even if you find yourself starting to shake two hours before show time, don’t beat yourself up about it. You’re in very, very good company.

Breathe
It may sound simple or clichéd, but learning to breathe correctly can lower tension levels and calm the fight or flight response that threatens to derail your gig. “Some people call it diaphragmatic breathing or belly breathing,” says Dr. Kageyama. “In the military they call it tactical breathing, and when pregnant women take Lamaze classes, they’re taught the same sort of thing. The reason is that breathing from the belly is the way we breathe when we were born. As we get older, we breathe with our chest more, but breathing more deeply reduces tension, even if our body doesn’t want to do it under pressure.”

Try slowing down your breathing, and you’ll notice your mind slows down, too. Breathing techniques are one of the most powerful and natural stress relievers; yoga, meditation, and chi gong are all based on this principal. Forcing yourself to take a moment to breathe from the belly before you go on stage can help calm your body and mind. Here’s a video to help you get started.

Set realistic expectations
According to New York City-based vocal and performance coach Kevin Richards, one of the biggest anti-anxiety skills you can practice as a musician is training yourself not to expect a perfect performance. “That kind of result is mostly unattainable,” he says. “Singers, guitarists, drummers, and bassists are not machines and nothing is perfect. What you’re looking for instead is an optimal performance.”

Rehearse thoroughly
“Practicing is your own personal woodshedding where you work on your instrument or technique, but rehearsal is running a performance as you would in front of an audience with no stops,” says Richards. While both are valuable, he continues, many of his clients focus on the former and neglect the latter, leading to unnecessary pre-show anxiety. “Every performance is going to have an inherent amount of mistakes in it and by doing mock performances, you find out what those inherent problems can be. Once you discover them, you can try to correct them beforehand, or learn how to deal with them on the fly, should they happen again,” he says.

Richards recommends running through mock performances as many times as possible before your big gig, and recording audio and video along the way. “The more times you view yourself performing, the more objective you become about evaluating your own strengths and weaknesses on stage,” he says. “Watching yourself do a bunch of mock run-throughs also leads you to become aware of everything that can happen on stage during your show, which then helps reduce your uncertainty and fear the day of.”

Train with adversity
Another way to up your confidence on stage and lower your pre-show jitters is to take a cue directly from sport psychology. Dr. Kageyama describes how football players sometimes practice with piped in crowd noise to simulate the added distractions of game day — and recommends that musicians apply the same strategy in the practice room, garage, or rehearsal studio.

“If you have experience dealing with adversity, it’s not going to throw you as much,” he says. “Try having friends come with you when you practice and do things to mess with you. They can put a TV up loud, randomly call out different songs for you to do, throw wads of paper at you, unplug your amp, or turn the lights on and off — anything to up the intensity in a safe setting so you learn how to deal with it.”

The doctor further advises that your job is not simply to survive such challenges, but to treat each rehearsal as if it’s the real deal, regardless of spitballs and flickering lights. The eventual goal? “To be able to play your best and handle any situation with absolute poise, regardless of what’s going on around you,” says the doctor.

Rehearse mentally
Richards advises his clients to go over their performances in their heads before they do them on stage. “As a lead singer myself, I do this,” he says. “I sit in a chair and go through each song, thinking about how I’m going to sing it, how I’m going to move on stage. I visualize everything in my head. Mentally rehearsing this way can lower anxiety because it gets you familiar with the performance in a deep way and on your own terms.”

Another aspect of mentally rehearsing is to go over a checklist of potential problems that could happen during a set — and how you would respond to each of them. “There are always things that will pop up unexpectedly, but if you’ve worked out the foreseeable bugs ahead of time and feel prepared enough, you won’t worry as much,” he says.

Focus on what’s important at the moment
Dr. Kageyama points out that humans have a fixed attention capacity and each of us can only focus on a certain number of things at once. In other words, the more energy you spend on nerves and jittery fantasies like “what if I make a mistake?” or “what if the crowd hates me?” the less energy you have to spend on the actual performance.

“If we don’t know what to think about on stage, our minds will fill in the gaps with stuff that isn’t helpful, so it’s important to monopolize your attention only on those things that you have control over and are in the present moment,” continues Kageyama. “What’s coming up in four measures isn’t as important as the note that you’re playing or singing right now. If you find yourself worrying about making mistakes on stage — or anything else — ask yourself, is this making me play better or worse? If it’s not going to help, you simply don’t have the luxury to engage in that thought or activity.”

Easier said than done, of course, but the doctor reiterates that developing courage and focus on stage is a long-term skill to be honed, not a magical, instantaneous cure. Dr. Kageyama recommends watching this video to help convey this point.

Educate before you medicate
Whether it’s alcohol, marijuana, nicotine, or other substances, many musicians try to manage their nerves with the help of a pre-show sip or puff. Some also turn to beta blockers, prescription drugs generally given to treat heart conditions or high blood pressure, that can have a calming effect as well.

“When musicians drink or smoke before performing, their impression is that their experience on stage is more pleasant than if they’d performed sober,” says Dr. Kageyama. “Whether they sound better is not even a primary concern. In some cases, it does take the edge off and free you to maybe play better, but having two or three shots, for example, generally just makes you sound worse. In the long run, when it comes to playing your very best, self-medicating doesn’t do much.”

Dr. Kageyama says that beta blockers can be effective for dealing with the physical response to anxiety only, and not the mental and emotional aspects of it. “For some people, once the physical stuff is off the table due to medication, the mental and emotional elements tend to fall in line,” he says. “They are more focused on the task at hand and don’t feel as out of control, so they play better.”

For a lot of musicians, though, beta blockers don’t cut it. “Even if you take the physical issues off the table, some people will still be distracted and think about the wrong things,” Kageyama says. “Some people swear by them and others say it doesn’t do much. My stance is that you don’t need them in the long run. It’s better to work on developing the skills and confidence to do what you want to do without medication.”

Of course, if you decide that any drug, including beta blockers, are an option you’d like to explore, be sure to research possible side effects and have a thorough conversation with your doctor before diving in.

Relax on the day of the show
Richards cautions that squeezing to get things done the day of a show leads to anxiety that can interfere with your performance. “Get a lot of sleep, eat properly, and do as much of your prep as you can the day or week before,” he says. “Cramming band rehearsal until 2am the night before just leads to more nerves. You want to maintain a state of mental quiet the day of a show.”

Once you arrive at a venue, Richards advises finding a place to be by yourself and doing a final mental rehearsal before going on stage. “Don’t ham it up with your friends and then just run on stage, and if you’re at a competition, don’t watch the people who are going on before you,” he says. “The last thing you need is to see someone good go on before you, psych yourself out, and have to deal with the extra fear and symptoms that brings up.”

Michael Gallant plays eclectic indie rock with Aurical and will be releasing his first solo instrumental album in early 2013. He is also the founder and CEO of Gallant Music, a content and music creation firm based out of New York City. For more, visit auricalmusic.com and gallantmusic.com. Follow him on Twitter at @Michael_Gallant.