In addition to your microphones, DAW/console, and room, an essential part of any home studio set-up is your signal processing gear. From the dynamics control of compressors and limiters to the effects processing of reverb and delay, these tools are necessary to create a professional-sounding final product. But for the new engineer, these effects can be fairly mysterious, and a tendency to overuse plug-ins and outboard gear is commonplace, especially for someone just learning the nuances of the art of recording.

We’ll explore the functions of these units by way of a fictitious example. You spent the last two weekends tracking instruments and vocals for a friend’s rock band using your new digital audio interface and music production software. Because the tracking took place in the same room as your interface and computer, everything was monitored on headphones. Now you’re faced with mixing the project in a spare bedroom using near-field monitors. In all, the first part of the process went well: the tracks sound pretty good, the band’s time and tuning were on, and the performances had the right energy. Inevitably, there are a few things that caught your attention that will need to be addressed with your signal processing software.

First, there is a very wide dynamic range in the lead vocals and various solo parts. Second, the direct-recorded rhythm guitars sound flat and dry. Finally, the drums were so loud in the room while the group’s drummer recorded that it was difficult to do any critical listening during recording. All you are sure of is that each mic was working and that none of the drum levels seemed to overload, but you’re pretty sure the drum tracks will need some fine tuning to sit properly in the mixes.

How can you best use your typical signal processing plug-ins to enhance and optimize your recording? Understanding how the dynamic control processors like compressors, limiters, EQs, and gates function, and knowing how to use multi-effects such as delays and reverbs to perfection will make you a better producer and engineer. It’s also important to remember that signal processing tools are just that – tools. There are no rules stating you can’t use them in different or novel ways to create new sounds. But before doing that, it makes sense to learn about the basic parameters of each and the functions they were invented to serve.

Compressors and Limiters
While it’s common to use compressors and gates when going to tape, let’s assume that little to no plug-in processing was used in the tracking of the instruments. (One reason not to use plug-in processing to tape is that it is destructive, which is to say, you can’t go back and remove it once the audio has been printed to the drive.) In our scenario, the tracks were recorded clean, with only guitar amp tone control settings, stomp boxes, and microphone placement used to establish the overall sound of the track.

After setting the instrument levels, you begin the mixing process by working on the lead vocal of track one. The singer was varying his voice tone and volume levels throughout the song, toggling between low whispers, soft and loud vocalizing, and ultimately to a primal scream and growl in the outro. How will you treat these very different vocal dynamics so they fit into the overall mix? 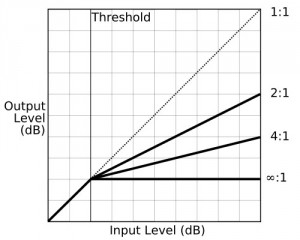 A compressor reduces the amount of output signal level in relation to the input signal level according to a given ratio, beginning at your user-defined threshold. In other words, it brings the loudest sounds down, and brings the softest sounds up. This is ultimately determined by the ratio setting. For example, you set a threshold for the output signal. A compression ratio of 2:1 means that for every 2 dB the input level is above the threshold you’ve set, the output level is reduced by 1 dB. A ratio of 4:1 means that if the input signal is 4 dB over the threshold, it will be brought down to 1 dB over the threshold, or reduced by 3 dB. It’s as if you were riding the gain on a console fader. When the input signal gets too loud, you pull the fader down, lowering the gain. When the signal gets too soft, you push the fader up, raising the gain.

A limiter allows you to set a maximum output level that will not be exceeded, regardless of the amount of input signal level. It’s often described as a 60:1 ratio, or ∞:1 ratio. Anything that exceeds the threshold is brought down to the output level you’ve set.

In our example, the sections where the vocalist sang the verses were dynamically consistent, but in a few spots, the vocal level dropped down to an intimate, whispery style, and the signal is getting lost in the mix. Here, compression will do the trick. 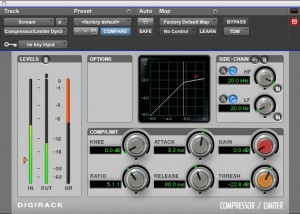 Depending on how great of a dB variation, start by setting the ratio to approximately half the difference between the highest and lowest vocal level on this track. For example, if there is a 10 dB difference between the vocal’s dynamic high and low point, you can set the compressor’s ratio to 5:1. Now reduce the threshold setting to the point at which you want the gain reduction of the vocal to start. You begin to notice the sound of the gain reduction as it kicks in and it may sound a little unnatural. Try adjusting the attack time of the compressor. The attack and release time parameters control how fast the compressor will respond as the signal crosses the threshold. Now you may find that the overall vocal level has been reduced considerably. Even though you like the evenness of the vocals, the level is now too low in the mix. When using gain reduction, it is often necessary to raise the output gain of the compressor to bring the vocal back to a usable listening level. 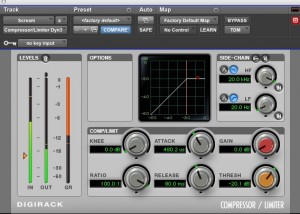 On the phrases where the singer screamed and growled, a better choice might be a limiter. If the verses and the screaming phrases are on the same track, separate the sections by copying the screaming and growling vocals to a new track. Let’s say that the screaming is consistently much louder than the growl and that the growl is near the level you want the verse vocal to be. Insert the compressor plug-in on the new track and set the limiter’s ratio to the maximum value. Now adjust the threshold of the compress/limiter to a point at which both the scream/growl vocals produce the same output signal level. With a limiter you can easily knock down the louder scream so it’s equal to the growl’s amplitude.

As you learn about compressors and limiters, try experimenting with different ratio and threshold values. Tweak the attack and release parameters and experience their effect. Try some of the presets found in the plug-in preset menu in your software. If you are working with the Compressor/Limiter Dyn3 in Pro Tools, a helpful visual indicator for setting compressor parameter values is the real-time dB level indicator. This small square in the input/output graphic reflects input-to-output levels as compression or limiting begins to affect the signal.

Try playing with the factory presets. The presets that come with your music production software were designed by recording studio professionals and are offered to you as a starting point. You can also create, name, and edit your own presets for future use.

EQ
The drums offer a completely different challenge. Although you may use some dynamic processing on the drums, such as a limiter placed on a stereo group channel output, if recorded individually, each drum needs to be listened to and treated on its own. During recording, it’s often difficult to distinguish between the direct sound of the drums in the room and what was being recorded. Now at mix, you might hear things you didn’t notice during the tracking session. The kick drum sounds a bit “tubby,” there’s an overtone ring somewhere in the snare and the deeply-tuned floor tom has a five-second tonal decay time. None of these drum issues are insurmountable when using the right kind of plug-in processing.

First, it is important to keep in mind the type and style of drum sound you want to produce. For rock, the kick and snare are primary. They need to be tight, clearly defined and in your face. Let’s start with the kick. After placing a limiter on the kick to even out the level, you found the overall kick drum timbre did not cut through. The large diaphragm dynamic mic you placed on the kick delivered a deep fat bottom but the midrange frequencies are over emphasized and the top end frequencies are weak. For making adjustments relating to frequency, the right plug-in tool is the equalizer (aka EQ). 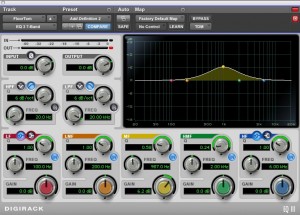 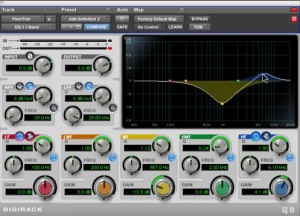 The EQ is a frequency-specific amplifier, and it comes in two basic flavors: graphic or parametric. Both essentially make tonal adjustments by increasing or decreasing amplitude at specific frequencies, but in the case of the graphic EQ, the bands are set at fixed center frequencies across the 20-20kHz bandwidth. The number of bands may vary from five to 30.

To fine tune the kick drum, we’ll grab a 7-band parametric EQ. It provides a smaller number of bands, yet gives the user more precise control over each band than a graphic EQ. Each frequency band has a dB control, usually +/-15 dB, a sweepable frequency range control, and a “Q” control that sets the width of the frequency band to be adjusted. The higher the Q, the narrower the frequency band that will be affected. Conversely, lower Q values result in a wider bandwidth range being boosted or cut.

In the case of the kick drum, the low-mid to mid-range frequencies (500Hz to 2.5kHz) are causing the “tubby” kick sound. Tune the EQ’s frequency band to emphasize the tubbiness in both amplitude and bandwidth. Don’t be afraid to be extreme with the frequency’s amplitude control. You want to really hear the influence of the EQ on the kick drum’s sound. Once you have found the frequency at which the tubby sound is most extreme, drag the frequency point into negative values. This should greatly reduce the proper frequency range to minimize the kick’s unwanted tone.

The technique of emphasizing and then subtracting unwanted frequencies is one way to eliminate annoying hums, rings, and any other frequency zones that need to be equalized. This technique will also be very effective on the ringing snare drum overtone. Finally, to give the kick drum a bit more definition, you can use the same method of experimenting to find the right frequency to boost to emphasize the kick drum’s attack. It turns out that it is at the high-frequency EQ band at 7kHz. By boosting the EQ to brighten the transient attacks, the kick sounds fat, but now has the attack to punch through the mix without overpowering the other tracks.

Keith Hatschek is a regular contributor to Echoes, author of two books on the music industry and directs the Music Management program at University of the Pacific. Jeff Crawford is a recording engineer and producer with more than 30 years industry experience. He also teaches music technology at Pacific.