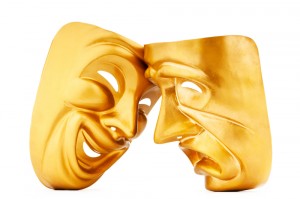 I was just working on an article comparing some out-of-the-box promotion ideas; the ones that were successes and the ones that were failures. The thing is, I couldn’t think of a single “failure.” And it’s not because I think I’m some huge indie music success. It’s simple: When we’re still trying, we never fail.

I’ve had many “failures” in the casual, muggle sense of the word. I’ve tried to raise money for records, to do music promotion to get bigger audiences to come to shows, and made hundreds of cold calls only to hear hundreds of “no’s.” Yet none of these occur to me as a failure. At the same time, I have to fend off this little voice in my head that chants, “you’re not succeeding yet…”

Perhaps I’m a “glass half full” kinda gal, because my only explanation for not qualifying these “misses” as failures in my music career is that every time I haven’t succeeded, I’ve learned something. Perhaps it’s in the semantics of it all: to me, “not succeeding” means I might have fallen short of specific expectations I had. “Failure” is not the same as “not succeeding” to me. I’m on a road, a journey, and I will never really fail until I stop, cold turkey.

It’s not a white-or-black type of conversation. There are plenty of times I haven’t succeeded. None of my three piano-pop records have hit gold or platinum status – I haven’t even sold enough copies to pay my NYC rent. My fan funding campaign didn’t raise enough money to master the record or hire a high-end PR company to help push it out into the world. And no matter how hard I try, I can’t seem to pack a mid-size New York venue.

As depressing as that all sounds, there are bright sides to every effort, despite that whatever expectation I had wasn’t met. I couldn’t hire a PR firm, but my fan funding campaign allowed me to pay my band and an orchestra for my record, a dream come true for me.

All of this leads me to believe I have fairly high standards and often out-of-reach expectations. Don’t we all? It’s taken me years to get this, but setting out big goals and “only” getting mini-results doesn’t qualify as “failure.” I had a goal of winning a Grammy before age 30. If you’ve read any of my past entries or my blog, Living On Gigging, you know that when I hit 30, I had massive panic attacks, anxiety, and overall misery. What I was finally able to recognize, thankfully, was that my perspective was focused on the one thing I didn’t obtain, the one failure (as I initially called it). I wasn’t acknowledging all the steps I had taken and the results I did accomplish in my time as a full-time artist and musician.

Eventually, I was finally able to acknowledge the results I created in this crazy life I’ve chosen, and got clear that I was committed to having an impact on this crazy industry. That is when I realized success was not about winning the Grammy, it was about living the life of someone who is out to win a Grammy. I am on that path. If I get there, I get there, if not, I’m living the life of someone who’s on a road they are passionate about.

53 thoughts on “Why We Indie Musicians Never Fail”