I work in waves. I can write a ton of songs in a few months then nothing. Boom. Blank. I used to freak out that my songwriting creativity was lost and gone forever. Now I know this is just how I work. I have three phases of my music career process: the touring, the creative and songwriting, and the business. They seem to weave in and out of each other, like astrology stars lining up for a good day in love. When I’m in touring mode or song writing mode, I’m never really psyched about booking, making phone calls, or sending emails. When my touring and creative spurts are over, I kick my music business plan into high-gear.

I’ve learned to trust these waves of inspiration, and know how to shift my daily schedule to make sure that I am productive and tackle each area (creative, touring, business plan) every day. The biggest thing I’ve implemented in my life that has made a massive difference is to get a plan, decide on definitive actions, and schedule when those actions will get completed. Inspiration is not something you wait around for. It’s something you can generate.

That said, there is also something to be said about patience and giving myself room for results to flow in.

Two years ago, on a Wednesday night in Switzerland, I was in “tour mode,” sitting on my temporary bed in a little mountain-town house owned by the booker of that night’s gig. I was getting ready to perform at a high-paying, low-satisfying fancy restaurant show. One month prior I was in mega “business mode,” yet I left for Europe with a few “we’ll sees” and “let me get back to yous” and no solid gigs or opportunities to return home to. Until that night…

In between sets, my phone started showing all kinds of LED love. I had gotten an email confirming a college show for $1,100, a date on a Connecticut news channel, and an invitation to go to a Korean Film Festival to perform one of my film scores live (all expenses paid!). These were results from efforts I had initiated months ago, back when I was in “business mode.” And even though I really wanted these results to be immediate so I could move into my creative and touring zones without interruption and distraction, I suddenly had a new energy while I performed for the waitresses last night. (The audience was chewing too loudly to notice me, and the one table that did, well, they took pictures and bought my CDs only because they thought I was Sara Bareilles. No big deal).

I replied to all of my emails, confirming my participation in everything I was offered (that’s a whole other article: say yes to EVERYTHING). My left hand was on my phone, my right hand was making up some nice arpeggios, perfectly appropriate for dinner.

What I learned that night was that it was okay to wear many hats at one time, and that successes in one area of my life could indeed inspire my creativity in another. I thought I should have been focused on performing and touring, and that being in “business mode” was something I do when I’m home in front of my computer, sending emails and making phone calls. But it’s not as compartmentalized as I thought. As an independent musician, the touring, creative, and business processes often collide. Instead of resisting this notion, I’ve learned to embrace it so that I have a life that works. 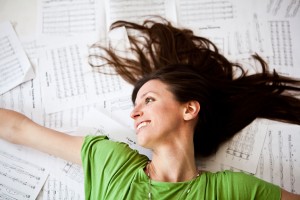 2 thoughts on “Balancing songwriting, your music career, and a business plan – and how to have productive patience”