It’s fun and easy to blame the woes of the world on major labels. After all, they’ve brought us The Pussycat Dolls, Milli Vanilli, and global warming. Oh yeah, there’s also the 360 record deal.

It’s worth mentioning that 360 deals (AKA Multiple Rights Deals) are common across all types of music labels (majors, indies, etc.), and music publishers are also in on the action with versions of their own. Not to be left out, concert promotion giant Live Nation also bangs the drum, having signed so-called 360 deals with the likes of Madonna
and Jay-Z. 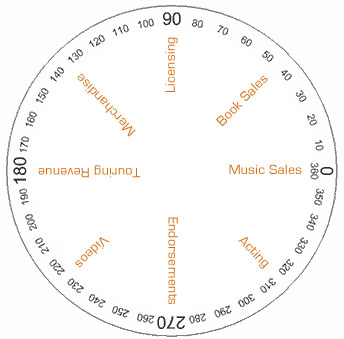 A decade or so ago, a label’s job was to find talent, finance a recording, manufacture copies, and distribute and promote albums through the industry’s established channels: radio, press, record stores, (video) TV, etc. Inasmuch as the label’s contribution to an artist’s career was in the creation, promotion, and sale of the recorded work, the terms of an artist’s contract with the label were limited to percentages (fair or not) of music sales.

The shift (some cite the 2002 EMI deal with UK megastar Robbie Williams as the dawn of the 360 record company deal) is the labels’ tapping into revenue streams outside of music sales. Concert profits, endorsements, book sales, merchandise – any means of income generated by an artist could be subject to the terms of the deal. Basically, if you’re signed to a 360 deal, when you make money, the label takes some, even if it has nothing to do with selling your music.

The reason why labels wanted to do this seems clear: self preservation. Album sales are down and are not coming back to where they peaked in 2009, and labels are not making the money they used to. Creative artists are finding new ways to make money outside of the record-sale paradigm, and labels are looking to benefit.

Tour support
Each 360 deal is different, but in many cases, artists who would never have received tour support from their label can expect to get some advances in exchange for a percent of touring income. Considering the artist is getting money up front, and touring has traditionally been tied to the promotion of record sales, this element of the 360 deals seems one of the easier to defend.

But, detractors argue, labels are woefully understaffed and have no expertise in event production or promotion, so expecting them to take a hand in promoting, booking, and managing a tour with any degree of competence is foolish. Why share the revenue with them? Particularly as you’ll still need to hire (and pay) a booking agent, promoter, and tour manager.

We’re jamming – not rapping
An argument used in support of 360 deals includes the fact that some bands – jam bands are most commonly used as the example – who would never have received label interest in in the past will now be able to get a deal, which means money up front to help promote and expand their careers.

Jam bands have always turned the industry model upside down, and even the most successful have never been label showpieces. Minimal record sales, songs too long for radio, endless touring, encouraging fans to record shows and distribute bootlegs… this is not how the labels work. With a 360 deal, advocates argue, these types of bands will court favor with labels who won’t be focused exclusively on how the records sell.

On the other side of this coin are rappers and hip hop artists. Clothing, shoe, beverage, and other non-music endorsement deals are where many hip hop artists earn their living, and now this income would be subject to being split with a label. In addition, artists who want nothing to do with endorsements or products/promotions unrelated to music may find themselves forced into such deals by a label looking to cash in on their popularity without consideration for their best interest or artistic integrity.

Get a hit… no hurry
Another argument in support of the 360 deal is that with a larger stake in an artist’s long-term success, labels are likely banking on one immediate hit and will sign artists with the intent of helping them develop, mature, and build an audience over time. Labels do spend a lot of money and take the bulk of the risk on an artist’s commercial viability, and when the risk doesn’t pay off right away, they’ll cut their losses by dropping the artist, often only months after signing them.

360 deals may take some of that pressure off. The need for an immediate blockbuster hit is tempered if the artist shows incremental successes. Longevity as an artist is often tied to an organic, and slow, incubation process. Labels making money off multiple streams takes the edge off their investment having to return immediately.

This is all dismissed by detractors who argue that this is counter to the way labels have always operated. You’re going to promote this album and this artist, and in six months, when the album hasn’t sold, you’re going to stand behind this guy for another and another? Fat chance.

New paradigm
Not long ago – when the barriers to bringing an album to market included massive recording costs and the need for radio airplay, mainstream press, and TV – the value of signing with a major label was obvious. But everything has changed. Blogs, digital promotion, online videos, downloading, licensing, and touring are major parts of the new paradigm, and the labels have little to do with any of that. Not to mention that the cost of recording an album can be significantly less than what it used to be.

So are 360 deals the future? Who knows? There’s no question they’re here now, but there are those in the industry who argue that these deals won’t be around in another ten years and won’t save the old guard. Successful independents have managers and hand-picked teams that work as a 360 system now. If an artist can assemble his or her own team who can manage all the aspects of his/her career and share in the successes, is willing to work hard and be patient – and especially if he or she can manage to find financial backing – the limits to how grand a career you can carve without a label are constantly being pushed.

Maybe the labels will take a page from the indie playbook and develop systems that can deliver on all the things they mean to profit from. It seems difficult to imagine a music industry without the big guys around to push the big stars. Indie clout challenges the old operating procedures, but the old dogs aren’t dead… yet.

More on 360 Deals:
The Musician’s Guide To The 360 Record Deal (Music Think Tank)

360 Deals and What They Indicate About the Future of the Music Industry Structure
(By Jonathan E. Basofin from Chicago-Kent College of Law, Illinois Institute of Technology). This PDF offers a very thorough exploration of the industry and how 360 Deals fit in.