For decades, record labels have served as “banks” for musicians, loaning artists money up-front to write, record, and release their music. In the utopian scenario, this up-front money (an advance), would be paid back from the artist’s royalty earnings from album sales (recoupment), and everyone would walk away happy.

In the early 2000s, many major and independent labels began insisting that artists also provide a share of touring, licensing, merch, and sponsorship revenues – called a 360-deal – to help make up for slumping record sales. While we’re not going to debate the intrinsic value or various arguments against these deals, let’s just say they often come with strings attached, requiring artists to give the label a wide range of rights (such as ownership of the master recordings) for extended periods of time. 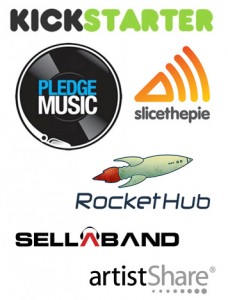 Of course, getting any sort of label deal is not the priority of many indie artists, and paths now exist to connect you to a targeted source of potential revenue to help you fund your next album, tour, or video: your fans. Fan-funding sites like Kickstarter, Pledge Music, RocketHub, Cash Music, SellABand, Slicethepie, and ArtistShare (among others) continue the shift to an artist-empowered music industry, and provide the tools to easily connect your next endeavor with the people who might be willing to provide the funds you need to get your project off the ground (and completed).

A closer look at Kickstarter
Based in New York City, Kickstarter was launched in 2009 to help artists connect with fans and supporters to raise funds for their creative projects. According to Billboard magazine, Kickstarter has already raised $73.5 million for more than 10,000 successful campaigns. Looking strictly at music-based projects, Kickstarter’s second most popular category after film, bands and artists have raised $16.5 million, funding more than 3,000 projects to date.

Creating a project is straightforward. First, you create an outline that describes your endeavor – including your funding goal, timeline, and rewards offered – and submit that to Kickstarter for review. Justin Kazmark, a member of Kickstarter’s communications team, explains that, “Every week we receive more than 1,000 proposals. Our community team reviews all of them, and typically 60% meet our guidelines and get accepted.”

Once the review is completed (generally a one- to two-day process), an approved project will be posted to Kickstarter.com and open for pledges and sharing with family, friends, fans, and social networks. Campaigns are all or nothing, meaning if you do not reach your goal within the allotted time, none of your backers will have to pay and you receive no funds. If you do reach, or exceed, your goal, the total amount pledged will be yours to keep (minus Kickstarter’s 5% cut), and you can then start your project and fulfilling the designated rewards for your backers.

Exactly what are Kickstarter’s guidelines? First, it must be a creative project that fits into one of Kickstarter’s 13 categories, or blurs the line between multiple categories. Second, it must be a project with an “achievable end point,” not just a means to raise money for a general cause. Third, it cannot be a charity or for a cause, because, as Kazmark explained, “We are a site for creativity and creative projects, not to fund charitable causes. There are other places to do that.” Fourth, they will not accept “fund my life” projects that raise money for things such as to go on vacation or pay for classes. And the final guideline is that there must be rewards offered. “We exist somewhere at the intersection of commerce and patronage, and the reward system is what compels project backers in exchange for pledges,” explains Kazmark.

[Ed note: All the fan-funding sites listed above have their own criteria and processes for acceptance, though most operate in similar ways. To figure out the best option for you, investigate and make sure to read the guidelines and regulations for each to be confident you understand how the process works.]

Three Tips for Success
Although Kickstarter makes it relatively easy to launch a fan-funding campaign, bringing that campaign to a successful completion so that you get the money to fund your project requires a little more thought. Based on his experience, Kickstarter’s Kazmark has a few suggestions that will help to increase the effectiveness of your campaign. First, “Create a video. It’s not a rule; you can just throw up photo, but if you take the time to create a video, stats show you have a better chance of running a successful project.”

New Haven-based string trio, Plume Giant, who used Kickstarter to raise over $9,000 to record their new album, created a video for their campaign. They suggest that artists, “Be honest with your video and have fun with it. Just focus getting something out there that gets your music and enthusiasm in front of people. And, if you can make it look pretty too, then it’s gold.”

Second, create a compelling reward structure, which Kazmark explained is “the most important element to ensure success.” If your project is to record an album, one obvious reward is a signed CD or vinyl copy of the album in exchange for a pledge. For other rewards, enticing supporters in ways that will really excite them can increase pledges, and it can also strengthen the relationship you have with your fans.

Gayle Skidmore‘s most recent album, Make Believe, was released with a coloring book of her own illustrations. Hailing from San Diego, Skidmore needed about $800 to hit the road in her own car for a cross-country solo tour to promote the album. Although her tour came together at the last minute, allowing her only a short period of time to complete her Kickstarter campaign, Skidmore was able to raise all the necessary funds in time thanks to a varied and especially creative list of rewards (each requiring a different level of support). She put these together to “make it worthwhile for people and help them feel like a part of my tour, because they really are,” she explained.

Skidmore offered up handwritten postcards from her stops along the way for any donation of $2 or more, limited edition posters, scarves knit by her (with the supporter able to select the colors), original art from her coloring book, guest list spots for her shows, or a video of her singing and playing a song of the backer’s choice, dedicated to them on YouTube. Her rewards nicely match the suggestions that Kickstarter makes on their site stating that everyone loves rewards that are limited edition, one-of-a-kind, and personalized. Another good strategy is to offer supporters behind the scenes access to a part of the creative process such as live streams of the band in the studio, or even notes and rough outlines about the project. Kazmark added, “Kickstarter is all about bringing the artist and the audience closer, so rewards that do that are usually successful.”

The third element to running a successful campaign is what Kazmark calls “intelligent outreach.” Spread the word of your campaign to your fans, friends, and family through your website, social networks, newsletters, blogs, personal emails, and word of mouth. Then, ask everyone to do the same for you by sharing it with their friends. This can exponentially increase the reach of your campaign. To avoid sounding like you are begging for help, Kazmark suggests “crafting a compelling story and trying to convey that story. Part of the narrative arc that exists is that you have this idea that you want to bring to life, and you need your audience to help bring it past the finish line. That can be very empowering for backers who want to get involved.”

Fan funding is a viable way for artists to create and promote their art independently with the added benefit of helping supporters feel like they are a part of the artist’s team. Plume Giant member Nolan Green sees fan-funded programs as an “incredible resource for emerging bands like us who might not be able to make a record without it.”

A number of artists also remark that the best part of a campaign is actually creating a community around their art and project, and finding encouragement in the support it generates. Green is one such musician, who explained, “Since the start of our campaign, people from all walks of life have come together to say they believe in what we’re doing. From past teachers, to family, to fans from corners of the world we didn’t even know our music had reached, the support is heartwarming and just making us excited to get in the studio.”

Skidmore agrees, saying her favorite part of the whole process was, “Getting to interact with new people. Several people who pledged were actually people that go on Kickstarter looking for interesting projects to support. I was able to find new fans for my music, and get to know them. It’s very cool to see people getting on there just to help others.”

Additionally, Kazmark noted that sharing a project can help clarify and solidify ideas for the artist. “Since as a project creator you are forced to articulate what it is you are trying to accomplish, it can be very helpful in identifying what you are trying to do. Then, when you go public and people start to support your ideas it’s intrinsically valuable.”

Keith Hatschek is a contributing writer for Echoes and the author of two books on the music industry: The Golden Moment: Recording Secrets of the Pros and How to Get a Job in the Music Industry. He directs the Music Management Program at University of the Pacific in Stockton, CA.

Casey Newlin is a member of the team that produces two indie rock festivals based in San Francisco, Noise Pop and the Treasure Island Music Festival.