From Bonaroo to High Sierra and the Warped Tour, it seems that more and more music festivals are popping up all over the world. But for emerging artists, landing a slot at a festival, even as an opening band, may seem out of reach – a goal for “later” in your career. 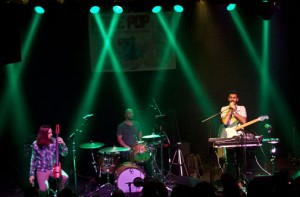 To find out just how feasible it is to try to land a spot on a festival stage, we spoke with a talent booker from San Francisco’s 18-year-old Noise Pop festival as well as a local SF band, Geographer, who got its first big break at last year’s Noise Pop. Geographer used that to build visibility, help land a national tour with an established act, and continue to build their following. They also returned to this year’s Noise Pop, but as a headliner instead of a support act.

Noise Pop is a well-respected (and well attended) music festival, that focuses exclusively on all things indie: music, art, and culture. Noise Pop takes place every February in San Francisco, with fans traveling from all over the world to attend, drawn by its eclectic mix of music and culture, not to mention the intimate venues around San Francisco that play host for the week’s shows.

Well-known acts such as The Shins, Modest Mouse, The White Stripes, and Death Cab for Cutie, got early career boosts at Noise Pop in previous years. The February 2011 line up carried on the all-things-indie tradition with headline performances by Best Coast, Yo La Tengo, Ted Leo and a solo set by Death Cab’s Ben Gibbard.

The Talent Booker’s Perspective
Talent booker Dan Strachota is on the team responsible for booking emerging artists at Noise Pop. To attract the attention of festival programmers, Dan says the key is to set yourself apart from the rest of the indie bands in your area. “Try to stand out from the pack in some way, either in your performance style, through the use of costumes, your musical style, by playing free shows, or even your marketing style.”

As an example, Dan mentioned Chow Nasty, a San Francisco band that “would flyer like mad whenever they had an upcoming show. They combined their unique name with a distinctive font and after six months of seeing their flyers everywhere, I thought, ‘OK, what is this band – who are they?’ They had generated enough interest through repetition for me to want to check them out.”

For any up-and-coming local band, landing a headlining slot at a festival may be fairly impossible, so the best-case scenario is to get a supporting gig for a more established band. When looking for possible openers, Dan says he “prefers bands that bring an element of fun to their music. It’s good to have high-energy bands that will bring a party vibe to that night’s show.”

When asked if there’s one piece of advice he would offer to an artist trying to land a festival gig, Dan stated that there is no silver bullet to achieve that goal. Instead, bands just have to do the hard work required – have a web presence, play lots of shows, and relentlessly work each day to build a following. “One of the most important things I look for is that the band works hard, they promote their own gigs, and they try to get more people in every time; they don’t just sit back and hope. I want to see bands that are actively involved and invested in their music careers.” 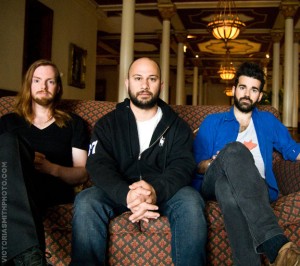 Tips From a (Now) Veteran Festival Band
San Francisco-based trio Geographer epitomizes many of the attributes that Dan outlines. The electro-influenced indie pop trio is comprised of vocalist/instrumentalist Mike Deni, cellist Nathan Blaz, and drummer Brian Ostreicher. The group has worked hard the last few years to play as many gigs as possible around the SF area, and by doing so, came to the attention of the Noise Pop booking team. Their hard work and growing fan base helped land Geographer a coveted opening spot for the 2010 festival in support of Atlas Sound at the historic Great American Music Hall. So just how did they land this breakthrough festival gig?

First, Deni says, they spent a lot of time getting to know everyone involved in the local music scene. It sounds obvious, but many musicians spend a great deal of time hidden away writing, rehearsing, and recording their music. According to Deni, it pays to get out and schmooze with your peers. Getting to know other bands, managers, booking agents, and club owners helped Geographer become part of the fabric of the San Francisco music scene.

This lead to sharing bills with other notable bands, and can also lead to musical collaborations or even partnering on a joint mini-tour. Deni said they would work “desperately to convince a band further along than us to headline a show so that we could then get a booker behind the bill.” Geographer’s payoff would then be as the support band to open the show. He suggested doing this repeatedly “until enough people in your hometown have seen you, so that you can eventually move up to support national touring acts” that come through your town with their correspondingly larger audiences.

Another key was Geographer’s dedicated efforts to keep up with self-promotion. “Promotion didn’t come naturally to us,” Deni admits. “Spending more time emailing than writing music can be demoralizing. But the benefits were worth the effort. We worked our asses off on promotion, and now that we have management, we can channel all that energy into our music.”

The Role of the Media & Press Kits
Attracting the attention of the press – which includes everyone from your local newspaper’s entertainment editor to music bloggers – will likely occur once you’ve built a local following and are playing larger shows. However, there is important work that can be done right now by any gigging band. Dan advises that once you land some shows, “Work your ass off to get people to those shows. Invite people who can help you, such as press, talent buyers, and local radio stations. Treat each show as special.” Send local music blogs and entertainment editors invitations to your gigs, keep the invites short and interesting, and only target outlets that tend to cover your style or genre of music.

You’ll also need a solid press kit. These days most bands rely heavily on Electronic Press Kits (or EPKs) as can be found on Sonicbids, a website that brings artists together with promoters/agents. Agents can access artist EPKs submitted for various events and festivals. In fact, Sonicbids is the exclusive method Noise Pop uses to screen and accept bands.

What goes into an effective EPK? Be sure to include a well-written, concise band bio, at least three songs, good photos (live and “press” photos if possible), press clippings (if you have them), upcoming show dates, band technical requirements, performance videos, and complete contact information. The Noise Pop team offered up four more key tips regarding your EPK:

1. The formatting of all text should be simple – keep it easy to read.
2. Put your best song first and make sure it has an interesting intro because this may be all the booker hears before deciding to move on.
3. Play to your strengths. For instance, if you are best known for powerful live shows, be sure to include a performance video clip and plenty of live photos of your band in packed venues.
4. Make sure all your links are active and that all songs, videos, and photos load when clicked. It’s frustrating and a potential deal killer when a booker interested in your band discovers your press kit elements cannot easily be accessed!

Applying to Festivals
The first step before applying to a festival is to find out which festivals present the type of music you perform. Take the time to really research which types of festivals have given artists in your genre their first break. (There’s a link to an extensive list of U.S. music festivals at the end of this story.)

Many festivals, including Noise Pop, favor local bands and artists, at least for support slots, so start in your own region. Reach out to musicians you know, managers, local bookers, and use the internet to research which opportunities seem to be the best fit. Once you narrow down the list to the best options, look closely at the festival website to see how they accept submissions, and more importantly, what their deadline is – most have submission deadlines at least one to two months before the festival takes place.

Once you’re ready, take the plunge and apply. It’s vital that you take care to tailor each submission to the specific festival. Write a short, engaging cover letter/email that shows you know who the festival caters to and if possible, give an example of a recent gig that demonstrates your suitability for the festival’s target audience.

If you don’t get selected, don’t get discouraged. Most festivals receive hundreds of submissions for just a handful of opening slots. If you weren’t in the top five, it doesn’t mean the bookers didn’t like your music. Keep in touch throughout the next year and ask to be informed of any upcoming opportunities. Festivals often sponsor other events, such as film screenings, benefits, and other activities throughout the year, so you never know when they might need an up-and-coming artist to fill a spot on short notice. 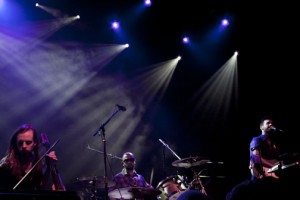 Geographer’s Mike Deni wraps up the story with what happened after the success of playing as a support act at Noise Pop ’10. “People really started coming out to our shows. Shortly afterwards, we were invited to go on an East Coast tour, and a bit later we were booked as support on our first national tour with Stars, which was a big jump for us.”

By the time Dan and his team were putting together the 2011 Noise Pop, the momentum that Geographer had been building since their breakthrough at the previous year’s festival led to being offered a slot as a headliner at San Francisco’s legendary club, The Independent. That sold-out show is evidence of Geographer’s continuing upward trajectory, which proves that talent, sweat equity, and landing a festival gig can be a path to success for an independent act.

Casey Newlin is a member of the team that produces two indie rock festivals based in San Francisco, Noise Pop and the Treasure Island Music Festival. Keith Hatschek is a regular contributor to Echoes and directs the Music Management program at University of the Pacific. They co-authored a September 2010 Echoes story on Online Music Collaboration.

15 thoughts on “How to Land a Music Festival Gig”