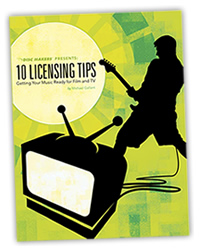 If you’re like many independent artists trying to get your music heard far and wide, you might dream of having your music licensed for use in movies and TV shows. Music placement can indeed be a potent career booster – when it comes to visibility, credibility, and getting paid – but it’s a tough world to break into, and many talented artists don’t know where to start. Here are some tips to help you get your house in order before you ever talk to a music supervisor on the phone – so when that precious licensing opportunity comes, you’ll be ready.

1. Get the levels and format right.
"It’s very important to get your tracks mastered," says Lindsay Fellows, music supervisor for movies like The Avengers, Bridge to Terabithia, and Journey to the Center of the Earth. "It’s a good spend. You end up with a volume level that is going to be competitive with major label commercial releases. A lot of indie stuff I get is 30 decibels lower than major releases. It’s flat and it doesn’t pop, which isn’t good."

When it comes to file format, diversity is key. "MP3s are usually fine to start off with," says music supervisor Gary Calamar, who has worked on shows like Weeds, True Blood, and Men of a Certain Age. "If we end up using the song in production, I will need a higher quality WAV or AIFF." Make sure that you have both the low-rez MP3 and higher rez WAV or AIFF files ready to go.

2. Choose your very best music.
"Focus on your strongest material," says Fellows. "Either tag your physical CD with standout tracks or, if you’re sending MP3s, send your three best songs."

But how do you know which tunes are your most powerful? "Choose the ones that work best live, the ones that your friends say are great," advises Fellows.

"Music supervisors look for a mood," adds Cheryl B. Engelhardt, an indie singer and songwriter who has had music placed in shows like The Real World and All My Children. "If a song doesn’t evoke a lot of emotion, it won’t do anything on screen. When I was choosing which songs to push for placement, I asked a lot of people. And even though I took everyone’s advice with a grain of salt, it turned out that my favorite songs to play live are also the most licensable. It just kind of works that way."

Choosing your best songs also means choosing your best recordings – and the vast majority of the time, that means nothing that isn’t the finished, polished master track. "I do want the final version of the song," said Calamar. "Sending me an unfinished demo to check out is generally a waste of my time."

3. Include everything music supervisors need to know.
"Whether you’re sending a hard CD or digital files, make sure all of the info is there," says Fellows. "Publishers, writers, track names, contact info, label – everything should be there, easily accessible." If you’re sending a physical CD, that could mean a sticker or insert in the album casing, or text printed directly on the CD – just make sure it’s readable, easy to find, and hard to misplace. If you’re submitting digital files, make sure that your metadata and ID3 tags (a.k.a. the identifying digital information that comes attached to music files) contain all the above-mentioned info that music supervisors may need. And regardless of whether you’re going physical or virtual with your song submissions, make sure that your album is entered into the Gracenote database. "You wouldn’t believe how many songs I get that come up listed as ’unknown’ or ’Track 1’ when I load them into iTunes," continues Fellows. "I delete them immediately. I just don’t have time."

Michael Gallant’s indie rock project Aurical released their debut album, Something to Say, on March 19th. Michael is also the founder and CEO of Gallant Music, a custom content and music creation firm based out of New York City. For more, visit auricalmusic.com and gallantmusic.com.

7 thoughts on “10 Music Licensing Tips: How to get your music ready for Film and TV”