Translating your live music performance to record takes preparation and the right mix of gear and personnel. Here are eight tips to make the most of your live music recording. 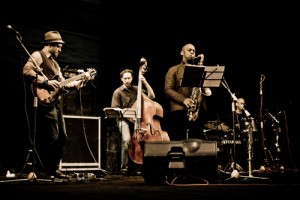 Laying down your tastiest tracks in the studio is one thing – but what if you want to capture the raw spontaneity and audience energy of a live gig? Live recordings can be a real challenge, even for the most ambitious DIY indie artist, so here are eight tips to help you capture the vibrant tracks you need.

1. Know your purpose, and choose the right-sized recording rig to get you there
Are you recording your gig for a large-scale, multi-disc release? Do you just want to review your show with your bandmates over beers to see where you rocked and where you… could use a little more practice? Or are you planning on sending 30-second sound clips around to your fans as teasers for your next gig?

If you’re not making the recording commercially available, your easiest, and cheapest, gear option is likely going to be some variation of a handheld recorder, possibly with an extra mic or two to give you more choices when it comes to working with the sound post-gig. If you plan to get the recording professionally mixed and mastered, make 1,000 copies, and sell them for $20 each, definitely investigate something higher end – probably a multi-track recording system with multiple mics and high-quality pre-amps.

(Check out Part 2 of this article to get some gear advice to put together the right recording rig for your purposes.)

2. Befriend the venue and explore ahead of time
Touch base with the venue, and the sound engineer, several days before the gig and find a time when you can do a walk-through. Make special note of where electrical outlets are and be sure to ask the house manager where you’ll be able to set up. Being nice is key, and bringing chocolate helps, emphasizes Cookie Marenco, California-based producer, engineer, and founder of Blue Coast Records. Don’t even think about showing up ten minutes before the show, introducing yourself to the probably-overworked-and-underpaid sound technician, and expecting any sort of cooperation.

Marenco also advises that, if you’re planning on plugging anything into a wall socket, be sure to ask the venue about their power, and if they have problems with any particular outlets or circuits. “If you’re fighting for the same circuits with the lighting system, you can get a buzz,” she says. “Look out for dimmers, or find out if there are any video crews that will be plugging in as well, since those can create buzzes too.”

Be sure that you do your recon mission when the venue is quiet. “Know what your environmental noise is going to be,” says Marenco. “Is there a train that’s going to go by during the middle of the set? Are there air conditioners and buzzing lights? Especially if you’re recording something more quiet and acoustic, knowing where extraneous noise comes from can help you position microphones to minimize it.”

3. Start with the mixing board
“The least expensive way to record a live gig is to take a board feed,” says Marenco. “Most clubs have at least a little mixing console for their PA and sometimes if you call in advance, you can find out if they have a two-track feed going out, and what kind of cables you need to record from it. You can bring a small, portable digital recorder and plug directly in.”

While the board is a good place to start, it may not yield jaw-dropping recorded sound, Marenco also notes. If you’re in a smaller club, for example, drums might not be miked at all, and the mix you record from the board could end up being all vocals and bass. Plus, you won’t get any of the live feel of the room.

If you have the gear and resources to do so, try remedying this by miking the room as well. “I always try to put up room mics on front corners of the stage facing the audience,” says Michael Winger, who runs the live recording company Flying Kitchen and has recorded acts like Regina Spektor and Tom Petty. “A mic at the back of the room usually sounds pretty bad and never mixes well with a direct recording off the board.”

4. Plan ahead
If you’re expecting to use more than a hand-held recorder, make sure to draw a map of the whole rig from mic to recorder to monitor, says Winger, so you know exactly what you’re looking at come gig-time.

Especially if you’re working with new pieces of gear, Marenco says, be sure to set things up and do a test recording session at home long before you hit the club. “Play some music, or even talk into it,” she advises. “Some recording units have built-in limiters and compressors that can be helpful, but other times they can cause problems, especially when it comes to automatic level setting.” Better to futz with input levels in your living room than while your band is anxiously waiting to rip into the first tune….

5. Bring a friend, or hire an engineer, to help
If you’re leaning towards anything more complicated than a simple hand-held recorder that you can just turn on and forget about, bring a friend to man the rig, so you don’t have to worry about it. “Performing and recording can both be stressful and the most important part of a live recoding is having a powerful emotional delivery,” says Winger. “It’s even harder when you’re thinking about whether or not the hard drive has enough space or if one of your channels has a buzz in it.”

If your budget permits, and you want a high-quality live recording worthy of an album release, consider hiring an experienced company or recording engineer to do the dirty work for you. You may be able to bring in someone good for only a few hundred dollars – but just make sure that you know they’re good before you book the date. Ask other musicians, or well-reputed local recording studios, for personal recommendations, and make sure to get a credit list, references, and audio samples from anyone you’re considering booking – and bonus points if they have experience working at the venue you’re playing. If everything checks out, sign the check and be done with it. The peace of mind you’ll gain from not having to worry about extra gear and logistics, in and of itself, may be worth the investment.

6. Bring the right supplies
Make a packing list at least a couple of days before the show, recommends Winger, and think of everything you might need in a pinch. Depending on the scale of your recording rig, your bag o’ tricks could include extra batteries, headphones, extension cables, pencil and paper, and gaffers tape, to make sure nobody trips over wires or accidentally unplugs your system mid-set. Having a thorough packing list is super helpful after the gig, when you’ll likely be wiped out and more prone to forgetting things.

And finally, “don’t forget to bring a flashlight,” advises Winger. “It’s always dark when you’re trying to either set up or tear down.”

7. Make sure the music is the best it can be
Even the most amazing recording of a live show won’t do you much good if the show itself falls flat. “Never sacrifice your performance for the recording,” said Winger. “Rehearse and get the best musicians you can to play with you. Make sure all your instruments, including the drums, are in tune and practice a lot. A band that’s been on the road touring for months always sounds better than a band that plays once a month. If you can’t get out on the road to tour, rehearse every day you can before your live recording.”

8. Bring a backup recording system
Gear craps out sometimes – end of story – so make sure you have a redundant recording system running at the same time as your primary system. Even if all you have as your fail-safe is a hand-held cassette recorder, or the cheesy built-in mic on your laptop, it’s better than nothing. Make sure you record everything with both systems.

After the gig, if your recording is in digital format, be sure to back it up onto a separate hard drive, and burn a CD or DVD for good measure. “Remember the rule of digital,” says Winger. “If it doesn’t exist in three separate places, then it doesn’t exist.”

Photo of Vinita Formation by Fajno via ShutterStock.com.