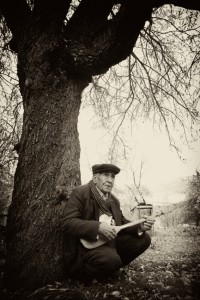 Most musicians I know hold a dream to someday ‘make it’ in the music business. To play in front of huge crowds and live a lifestyle that they can only imagine. Many of us believe that we’ll someday get there. Unfortunately most of us find ourselves growing older with an ever increasing fear that we’re missing the boat.

We’re conditioned to believe that if we’re going to make it then we have to do it at a young age. I had already started to have this feeling when I was in my early 20’s. I felt like I was slacking because I hadn’t ‘made it’ yet.

So how old is too old? Well, I think what we need to look at is the fundamental equation the whole business boils down to. It’s a value exchange between the audience and the artist. The audience pays money for the value they get from the artist. So ask yourself: how old would a performer have to be before you stopped receiving value from them? Would you not pay for a great artist who was 65 years old? I would. One of the best performances I’ve ever seen was a rock and roll band of men who were all in their 80’s!

So if people are willing to pay for good music then what’s standing in your way?

I saw an artist last night who didn’t mention her name once. There were no visual cues to let me know who she was. She never mentioned anything about CDs or merch for sale. No website. No mailing list. Nothing. When the show was over, she walked off the stage and into the dressing room.

It’s easy to look at her and see what she did wrong. What’s more difficult to see is that to one degree or another, most of us are making similar mistakes. A lot of musicians fall into the trap of thinking that either they’re going to be ‘discovered’ or nothing is going to happen at all, so there’s no real need or urgency to actually do the right things to grow an audience and a career.

So I urge you, instead of having your head in the imaginary future all the time, to take an honest look at where you are now. You have positive things going for you right now. It’s time you capitalize on those things and make the most of what you’ve got in front of you. Success is created in the present, not the future. You may never get to play Wembley Stadium or sing the national anthem at the Super Bowl, but you can absolutely have more and more fans coming to your shows. You can have a room full of people screaming your name. It may not be a 60,000 seat venue, but believe me, it will feel good.

What you need to do is let go of the belief that someday someone is going to make it easy for you and instead take 100% responsibility for your career. Have CDs and merch for sale and take responsibility for learning how to sell them. Have a mailing list and learn how to get people on it and how to use it. Take responsibility for letting people know who you are and how they can stay connected to you. Good things will happen in the real world when you step up to the plate, and believe me it will feel even better than when they happen in your imagination, no matter how old you are.

Article by Scott James of The Independent Rockstar Blog.