Excerpted from Bobby Owsinski’s book, How To Make Your Band Sound Great, published by Hal Leonard.

Just as audio recording yourself as much as possible is a valuable way to analyze and critique songs, parts, and performances, making video recordings should also be standard procedure. It’s like looking in a mirror. You’re able to step back, free from the distractions of playing, singing, and putting on a show, and actually see yourself the way the audience sees you. But be cautioned; sometimes it won’t look pretty, especially in the beginning.

It’s important that a new band make videos of its first few gigs, because you never get a feeling for what you’re really doing right or wrong until after the fact. If you’re playing regularly (like every week), shooting a gig once every couple of months is a good idea as well. I recommend that the whole band get together to watch so that you don’t have to go back later to a band member to explain any perceived imperfections if they didn’t watch with you.

Also, by watching together you can discuss areas in your playing or show that pop up, as well as discuss new ideas that you’ll inevitably get as you watch. Some people just can’t stand watching themselves (even some television and movie stars) and will resist, but think of it more as a learning experience than as a fashion statement. If you always hate how you look or play but can improve your performance to the point where you at least find it tolerable, then imagine the great reaction the audience will have as a result.

Making a great live video
There are basically two things that you need to make a great live video (assuming that you play well and put on a good show): great audio and a tripod. Forget about camera quality, resolution, format, or any kind of specs. If your video sounds bad or is shaking like crazy, it’s just a bad video.

Keep in mind that this product is not for distribution. It’s never to be used on YouTube, your website, to show your friends, or to try to get gigs. If you put something out that can be potentially distributed around the world, you want it to be great. This is simply a recording only for internal band use so everyone can see and hear their mistakes and find out what they can do better. Let’s look at the audio first. 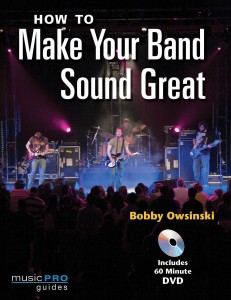 Audio is 50 Percent of the Final Product
If the sound is bad, then the picture always seems worse than it really is, so it’s really important to pay close attention to the audio when making a video. Here are some rules of thumb regarding audio for video:

– Use an external mic. You probably have some extra mics laying around already, or at least you can borrow a couple, so put them to use. The problem is that most consumer cameras have mini-jack mic inputs that won’t readily interface to an XLR or phone plug. No problem, just buy an adapter. They’re cheap and just about any mic you choose is going to be better than the $2 on-board camera mic. It will make a world of difference.

– Use a feed from the mixing board, or a combination of board feed and microphone that you can balance later. Either way, just treat the camera as if it were an audio-only recorder.

If you have to use the on-board microphone:
– Turn off the limiter. Most cameras have a built-in audio limiter to help keep audio overload to a minimum. While this might work okay when shooting those nice vacation movies, it’s horrible for band use, squashing and twisting your audio into a heap of crap even on the most expensive professional cameras. In all but the cheapest cameras, you can defeat the limiter by diving into the software menus and finding the Defeat selection in the audio section. You’ll hear the benefits of this action immediately.

– Turn the input level down. Just about any band will easily overload the audio inputs of a camera since they’re usually designed for capturing the noise of a family outing rather than the level of any number of instruments playing. If there’s a level control knob on the camera, turn it as low as it will go without turning it off. If it’s in a software menu, do the same. If you’re still overloading the input (the overload indicators are flickering red), you’ll have to get an attenuator pad to lower the microphone’s output, but these are pretty inexpensive (less than $20) and can come in handy for some everyday audio purposes as well. Remember, it’s a lot better to have audio where the level is too low than too high.

Get a Tripod
If you’re shooting a gig to just see how you’re doing or shooting a higher-end music video, you’ll need a tripod for at least some of the things you shoot. If you’re shooting a gig, get a tripod and set it up as high as it will go, so you won’t see audience heads and people passing in front. A nice, stable image will make viewing a lot easier later.

If you’re shooting something for a music video, hand-held shots can look exciting and hip, but you’ll need at least some tripod shots for things like B-roll, establishing shots and anything where you need more than a couple of seconds of a steady shot. Although tripods can run as high as a couple of thousand dollars, even a $25 cheapy is better than none at all. As with most everything, the more you spend the better it will be, in that it will last a whole lot longer, be sturdier, and be lighter – but anything is better that nothing.

Making a music video
If you decide that your live show is really strong and compelling and you’re ready to make that music video, here are some things to think about that will help take everything up a notch.

Get Establishing Shots
An establishing shot is something like a marquee with your name on it outside the venue, the venue exterior and sign, a flyer or newspaper advertisement with your name in it – anything to establish the time and the place of the event. Maybe you don’t want anyone to know the time or place of the event. That’s okay; shoot it anyway. Who knows when that footage might be a valuable addition to a documentary or a “Behind the Music” special about the band when you get famous! It’ll also have great nostalgia value many years from now. I can’t tell you the number of times that I’ve racked my brains about some club or concert hall that I played in 20 years ago.

B-Roll is So Important
B-roll is cutaway shots that are used to cover up an edit of an interview, audio narration, or a picture edit that might jump or look funny. A close up of a guitar pick, pictures on the wall, an empty stage or a stage with just your gear on it, a close up of the kick drum head with your name on it, a pan across an amp head, hands on a keyboard; these are all examples of B-roll. You can never have enough B-roll, so shoot everything you can think of. In the hands of a good editor it will all be used somewhere.

Shoot More Than One Take
More than one take allows for multiple camera angles if you only have one camera, and if you have multiple cameras then it allows for more interesting angles that a good editor can always use. If you have the chops, you can even cut between several uneven takes to make one good one.

Shoot A Lot More Than You Need
While I don’t suggest that you shoot at the ratio of a motion picture where they shoot at least ten minutes for every one minute they end up using, the more you shoot, the more good footage you’ll have to choose from and the more easily you’ll be able to cover up that funny audio or video edit. While I can’t tell you the perfect shooting ratio, too much will either cost you extra money in post-production (which is okay if you can afford it) or burn out your editor if he or she is doing it for free. It’s best to ask exactly how much footage your editor would like and if they want any specific shots before you shoot.

Don’t Mix Formats
Try not to mix cameras with different formats, resolutions, CODECs, frame rates, etc., as it will really make things a lot more difficult for the editor. For instance, don’t mix a camera that shoots DV with one that shoots HDV unless you have them both on the DV setting. Don’t mix an HDV camera with one that shoots ACHDV, and especially don’t mix a DV camera with something like an old Hi-8. That’s big trouble. You’re usually a lot better off using a single camera and shooting multiple takes than using two dissimilar cameras.

Get 25% off and free shipping when you buy How To Make Your Band Sound Great by Bobby Owsinski from MusicDispatch.com. Just use the code DM9 when checking out!

Echoes readers get 25% off and free shipping for selected titles from Hal Leonard Books purchased at MusicDispatch.com. Click here to see a list of all eligible titles, and use code DM9 at check out.

6 thoughts on “Using Video as a Learning Tool”