No one was closer to Michael Jackson at the height of his creative powers than Bruce Swedien, the five-time Grammy winner who, with Jackson and producer Quincy Jones in the studio, formed the trio responsible for the sound of Jackson’s records. 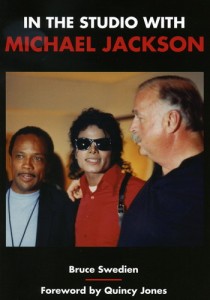 Excerpted from the book In The Studio With Michael Jackson (by Bruce Swedien © 2010). Published by Hal Leonard Books, an imprint of Hal Leonard Publishing. Reprinted with permission.

“Billie Jean”
The year is 1982. The song is “Billie Jean.” “Billie Jean” is a perfect example of what happened when I sat around dreaming about combining different recording techniques to produce a unique musical canvas, with a tremendous “sonic personality.”

I recorded the drums (played by my pal N’Dugu) with as tight and powerful a drum sound as I could. Of course I put N’Dugu’s drum set on my plywood drum platform. Also at this time, I had a special kick drum cover made that covers the entire front of the kick drum. There’s a slot in the cover with a zipper, where the mic fits through. When the kick drum mic is in place, in the slot in my drum cover, I zip the opening tight around the mic. I brought in my good friend George Massenburg’s spectacular sounding, portable, 12-channel mixing console, and used it to record the rhythm section. With it I recorded the bass, drums, and guitars on my analog 16-track, with no noise reduction equipment in the way of that fantastic sound.

“Billie Jean” may be the most personal song that Michael has ever written: a guilt-inspired paternity drama influenced by Michael’s run-ins with delusional female fans. “Billie Jean” is such a superb song. Michael told us: “It’s about a girl that climbed over the wall at my house, and was lounging out there, by the swimming pool. She was laying out there, near the pool, lounging – hangin’ out – with shades on, in her bathing suit.“ One morning she just showed up! She had accused Michael of being the father of one of her twins. Is that possible? I don’t think so.

“Billie Jean” was released in January 1983. The song topped the Billboard Hot 100 for seven weeks. It held the No. 1 spot on the R&B chart for nine weeks and sold more than a million singles. “Billie Jean” destroyed MTV’s color line. “Billie Jean” also saw a former kid singing star coming of age. This was the moment when he blossomed into the late 20th century’s dominant pop icon, Michael Jackson. “Billie Jean” is a song that, to this day, remains one of the most sonically arresting songs ever on Top 40 radio. In 1983 no one had ever heard anything quite like it.

“When we recorded “Billie Jean,” Quincy told me, “Svensk, this piece of music has to have the most unique sonic personality of anything that we have ever recorded.” I had Michael sing some of his vocal overdubs through a five-foot-long cardboard tube. Quincy brought in jazz saxophonist Tom Scott to play a very unusual instrument, the Lyricon, a wind-controlled analog synthesizer whose unique, trumpet-like lines are subtly woven through the track. Bassist Louis Johnson played a Yamaha bass with an ideal sound for “Billie Jean.”

I think it was Michael’s dancing, as much as his singing, that propelled the “Billie Jean” phenomenon. On May 16, 1983, more than 50 million viewers watched Michael debut his famous moonwalk in a mesmerizing performance on the Motown 25 television special. I don’t know about you, but I have never seen anything like that on television before or since. Then there was the “Billie Jean” video, in which Michael dances through a fantasy cityscape, with a sidewalk that lights up like a disco floor underfoot.

MTV almost never aired videos by black performers, and when they refused to show “Billie Jean,” CBS Records president Walter Yetnikoff went ballistic. He said to MTV, “I’m pulling everything we have off the air, all our product. I’m not going to give you any more videos. And I’m going to go public and tell them about the fact you don’t want to play music by a black guy!”

The Vincent Price rap on “Thriller”
When I begin reminiscing about recording the song “Thriller,” one of the first things that comes to mind is the Vincent Price rap. Quincy’s wife, Peggy Lipton, knew Vincent Price. So Quincy and Peggy got it together and called him. Vincent said he would love to do it. I remember Rod’s idea, at first, was that Vincent would just talk some horror talk – the type of lines he would deliver in some of his famous roles. Well, the night before the session with Vincent Price, I remember Quincy and Rod on the phone, talking excitedly about something to do with Vincent’s part in “Thriller.” I was getting the track ready for Vincent to overdub on, so I only overheard bits and pieces of Quincy and Rod’s conversation.

The next day at about 12:00 noon, Quincy showed up at the studio, looking like the cat that swallowed the canary! Q looked at me and said, “Svensk, Vincent Price is going to be here at 2:00 p.m.! Rod is writing Vincent’s rap in the taxicab on the way here to the studio!” Quincy told me, “I don’t think that Vincent has ever been on a pop record before. This should be interesting.” I get chills just thinking about it.

The next thing I knew, Rod came roaring into the control room with several sheets of paper in one hand, and a Marlboro cigarette with a two-inch ash ready to fall over the floor, in his mouth. Out of breath, Roddy said to me, “Bruce, quick – he’s here! I saw a car pull up, and it was Vincent Price! He’s on his way in!” He thrust the papers into my hand and said, “Give these to the secretary – have her photocopy these quick!” This was done, we put the “Thriller Rap” lyrics on the music stand. Vincent walked in, sat down on his chair, off he went, and it was all done in about two hours.

I used the same microphone setup as I used on Michael: my favorite Shure SM-7. Vincent Price had never used earphones in his work before. He reluctantly put them on, and when the music track for “Thriller” started, he jumped up from his stool with a very startled look on his face. I know he had never heard anything like that before. He asked Rod Temperton to come out in the studio with him and help him by cueing him where to come in and speak his verses. Rod actually wrote three verses for Vincent to do for “Thriller.” We recorded all three but only used two. I have that unused verse in my tapes somewhere.

Vincent experienced a huge resurgence in his career, commensurate with the incredible success of “Thriller.” About six months after the release of “Thriller,” Vincent appeared on the Johnny Carson Tonight Show. He talked about being in Paris, walking down the street and having a group of young people recognize him and chase him down the street to get his autograph.

To me, the miraculous thing about the Vincent Price rap on “Thriller” is that Rod Temperton wrote a brilliant Edgar Allan Poe–style spiel in the taxicab on the way to the session! When the chips are down, that’s when you find out what true genius is all about! Of course, speaking of unquestionable genius, Vincent’s performance was remarkable. Obviously, Vincent Price was in his element on “Thriller” – timing, inflection – and he did it in two takes! Michael’s vocals are more than wonderful as well. What an experience.

Get In The Studio With Michael Jackson by Bruce Swedien at HalLeonardBooks.com.

Quincy Jones: Tools For Success
Ask a songwriter: 5 questions for Five For Fighting’s John Ondrasik
How To Record A Great Vocal Take
Virtual synths and the art of imperfection
This is the Remix – Eight Tips on Reinventing Your Music

21 thoughts on “In the studio with Michael Jackson”