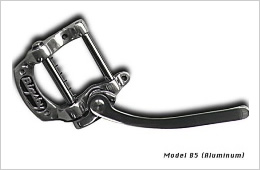 No matter what you call it, ‘whammy bar,’ ‘trem bar,’ or whatever, there’s only one (IMHO anyway) that’s stood the test of time for over half a century and remained the arbiter of cool: the Bigsby. Exuding an old-school vibe that still resonates today, the Bigsby Vibrato adds classic functionality to many an electric guitar.

The Vibe
The device itself is a study in artful simplicity: a spring-loaded arm attached to a pivoting metal bar where the strings attach, mounted on top of the guitar. Press down, the strings loosen and the pitch lowers, pull up to sharpen the pitch. The Bigsby is best suited for tasteful, subtle downbends rather than extreme ‘dive bombing’ ala the Floyd Rose and other locking system.

The Bigsby vibrato comes factory-installed on select guitar models from manufactures such as Gibson, Fender, PRS, and Rickenbacker. However it’s with Gretsch that the Bigsby is most often associated (over 55 years). It’s not surprising that after decades of collaboration, when the opportunity presented itself, Gretsch purchased Bigsby in 1999.

And while we’re at it, let’s clear up a common misconception: vibrato vs. tremolo. Unlike tremolo, which is a fluctuation of volume, vibrato is the fluctuation of pitch. So, while you may have heard the generic ‘tremolo bar’ term thrown around – the effect produced is actually vibrato. And, while the Fender Vibrolux is a great amp, the knobs directly to the right of reverb knob actually control the tremolo effect – not ‘Vibrato’ as the name would suggest (but no need to split hairs….we get it.)

Some History
When they build the Mt. Rushmore honoring 20th century American musical pioneers, Paul A. Bigsby will be right up there with Leo Fender and Les Paul. Bigsby is indeed a founding father. While Les Paul’s ground breaking “The Log” was one of the world’s first solid body electrics, it remained more of a prototype until the Gibson company eventually warmed to the concept.

That warming was no doubt fueled by watching Leo Fender’s success in mass marketing its Telecaster and Esquire models. However, before Fender got their arms around the solid body electric concept, it was Paul Bigsby, initially a builder of steel guitars for country-western swing players of the day, who built what’s considered the first modern solidbody electric.

The date was May 25, 1948, and the guitar was for country musician and guitar legend Merle Travis. A few years later at Travis’s request, and to improve upon an existing device, Bigsby designed and built the mechanism that we know today as the Bigsby True Vibrato. The ‘True’ bit means it’s possible to alter the tone above and below the normal pitch.  Today, the Bigsby remains a classic – some might say de facto — choice for players and guitar manufactures worldwide.

Players like Chet Atkins, Brian Setzer, Neil Young, Johnny A., and scores of others have incorporated the Bigsby sound as a signature. Perhaps not for everyone, but for some of us, a Bigsby tailpiece helps define an individual sound, style, and approach.

To quote the late great Les Paul,“When I put the first Les Paul out I put the Bigsby on there. I have it put on all my guitars, it just happens automatically. The Bigsby just goes with the Les Paul guitar!” I took Les’s advice and put a B7 on my ‘79 Les Paul Standard — your humble scribe couldn’t be happier.

For more info, visit Bigsby Guitar or check out the fantastic book: The Story Of Paul Bigsby, Father of the Modern Electric Solidbody Guitar by Andy Babiuk.

Chris Grova writes instruments and gear reviews as “Gear Guy Chris” for Music After 50, where this review first appeared.