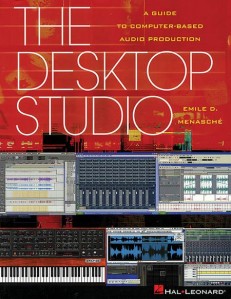 Excerpt from The Desktop Studio, A Guide To Computer-Based Audio Production by Emile Menasché, published by Hal Leonard.

The Internet offers a direct link between your desktop studio and the software and hardware vendors who power it. Manufacturers’ websites offer a wealth of information about upcoming releases, bug fixes, tips, and more. I make it a habit to log on to key sites about once a week. On more than one occasion, I’ve found an update online that hadn’t yet been announced in the press.

Major software upgrades may require a fee, but vendors regularly make incremental updates available to registered users free of charge. These updates can add new features – such as additional plug-ins, or compatibility with a new piece of hardware – or they can simply fix bugs or keep the software current with your computer’s operating system.

It might not get a lot of media attention, but the functional difference between a 3.0 and a 3.01 version can be staggering. Most websites post Read Me files that detail the changes made in each version of the software.

If you don’t want to subscribe to an email list or surf to every site to keep up to date on updates, a Web resource such as VersionTracker.com can give you the news on current versions for many applications.

You can also keep informed by subscribing to an online newsletter. Most vendors distribute free e-letters that inform you of updates, turn you on to tips, answer technical questions, and offer current information on drivers and operating system issues.

Vendor sites aren’t the only places to find information. Musician sites such as HarmonyCentral.com and Synthzone.com are full of useful links and information. Use these sites to link to user groups (for particular applications or more general topics), manufacturer sites, and unofficial sites that are devoted to the gear that make up your production arsenal. Newsgroups such as rec.audio.pro are also a good resource.

Shareware, Freeware, and Other Resources
The Internet is a great place to explore new software. Shareware is software that’s developed by independent vendors and costs a fraction of the price of commercial software. The world of shareware is almost limitless. You’ll find utilities (such as simple wave editors and MP3 players), as well as some full-featured programs like sequencers, software instruments, and effects.

Finding good shareware takes some research and a fondness for trial and error. There are some dogs out there, but you can also find some inexpensive gems online. Just be sure and support the folks who develop the software by registering and sending in the (often nominal) fee.

Freeware is like shareware – except, well, it’s free. You can find free plug-ins and utilities on the Web. Some of my favorites are a little delay-time calculator called DelayCalc; Jack, a utility that lets you route audio between applications within one computer; and Audacity, a cross-platform audio editor that works for Mac, Windows, and Linux. Like shareware, finding the good stuff can take some digging, but it’s also a lot of fun.

The Internet is also a great place to audition software and make purchases. You can download demos (usually with some features disabled) or trial versions (which are often full-featured, but will only work for a limited time, or may not allow you to save files). This is a great way to familiarize yourself with the vast array of options available.

The Online Music Community
In addition to keeping your computer as current as possible, the Internet is also a great way to share your creativity with other musicians, fans, and potential clients.

User Groups, Blogs, and Message Boards
User groups and message boards can provide you with insights you won’t find anywhere else. Because message boards are usually not affiliated with any manufacturer or publication (and proud of it!), you can get the unvarnished information – it’s up to you whether or not to take it as gospel. The nice thing is that you can read about real-world experiences and share your own. You can also post questions (you may or may not get a helpful answer).

Sometimes, in addition to average users, technicians from audio manufacturers may offer insights (or dispute criticisms!). User groups and blogs are often “unfiltered,” meaning that people can post whatever they want. Moderated groups, where there’s some control over posts, tend to be a little more structured. If you’re seeking advice, check out as many groups as possible – it’s sort of like getting a second opinion for a medical problem.

Collaborating Online
One of the most exciting developments in desktop production is online collaboration, which provides an Internet link between your computer and other musicians. Sites like Kompoz.com let users upload tracks and invite collaborators to work on them – or vice versa. Some sponsor contests, such as indabamusic.com, which offers remix contests in addition to other collaboration opportunities.

Because audio files are large, a high-speed connection is virtually essential when you’re collaborating over the Internet. Even with a fast connection, upload and download times can be long when you’re working with large, uncompressed audio files.

Musician Networking Sites
Musician networking sites are more focused on musicians than the more general social networking sites like MySpace and Facebook. Most of these communities consist of musicians or others in the music industry, with a few hardcore music fans thrown in. These sites let you create artist pages, upload music, or submit it to contests for consideration and criticism. Basic membership is often free, but the contests, critiques, and A&R services usually cost a fee. Examples include GarageBand.com (which is owned by iLike.com, a site where fans can hear music), and Broadjam.com. As with the free sites, these sites usually require that you own the copyright to any music you upload.

Buying and Selling Gear Online
The Internet is a great resource when you’re assembling a music rig or studio because you can find just about anything you’re interested in online. Reputable retailers like Sweetwater.com, MusiciansFriend.com, and GuitarCenter.com not only carry a lot of gear, but they often have online or phone tech support that can help answer your questions. Sites like CNET.com can be useful for reviews and comparison shopping. Even Amazon.com, known primarily for selling books and CDs, can be a good resource for musical gear.

Most software manufacturers, and many hardware manufacturers, also allow users to purchase goods directly from their sites. (In the case of software, this can often be via download.) One of the most innovative examples of this is Digidesign’s DigiDelivery service, where users can log in and create download sessions that allow for massive files to be transferred online.

Moving On
It’s interesting to note that many of the websites I’ve mentioned above didn’t even exist when the first edition of this book was publishied in 2002 – and many of the sites I mentioned in that volume were gone by the time I finished this chapter in early 2009. In fact, in the time it took to write the book, Twitter went from something only a few people knew about to a ubiquitous networking tool.

Perhaps in the future, higher-speed Internet connections – and increased capacity for portable music players – will mean that uncompressed audio will return to the fore. Perhaps online collaboration will become even more viable, and users will be able to share a single audio file in real time. We’re still so early in the development of both computer-aided music and software (think of the auto industry circa 1915).

Google and other search engines may be your most important resource of all, because they’ll help you find the next wave of websites, whatever that turns out to be.

Get 25% off and free shipping when you buy The Desktop Studio from MusicDispatch.com. Just use the code DM9 when checking out!

Echoes readers get 25% off and free shipping for selected titles from Hal Leonard Books purchased at MusicDispatch.com. Click here to see a list of all eligible titles, and use code DM9 at check out.

4 thoughts on “The Desktop Studio: The Internet as a Resource”