As the producer of classics from Frank Zappa, The White Stripes, and Kurt Elling – Joe Chiccarelli draws inspiration from a variety of sources in the studio.

From Behind The Glass, Volume II: Top Record Producers Tell How They Craft the Hits © 2009 by Howard Massey. Published by Backbeat Books, an imprint of Hal Leonard Publishing. Reprinted with permission. 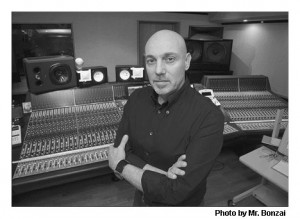 Joe Chiccarelli is a chameleon. Unlike many producers whose sonic stamp is immediately recognizable (a Roy Thomas Baker or a John Shanks, for example), you’d be hard-pressed to identify a Joe Chiccarelli “sound.” It’s hard to believe that the same individual who produced the rough-and-ready White Stripes’ Icky Thump was also responsible for the ephemeral, moody ambience of the Shins’ Wincing the Night Away or the smooth, slick jazz tones of Kurt Elling’s Night Moves. But not only was it the same guy in the studio, it was a body of work that netted him a 2008 Grammy nomination for Producer of the Year.

Chat with the soft-spoken, self-effacing Chiccarelli for just a few minutes and it becomes apparent why artists in so many different genres gravitate to him. “Honestly, I don’t think I’m confident enough in my abilities to have a sound and a strong direction,” he admits disarmingly. “It’s more important to me to study the song and the artist and figure out what’s strong about them and then help the record be the best it can be.”

Originally from Boston, Chiccarelli relocated to Los Angeles in the late 1970s after playing in a series of failed rock bands. Always interested in the technical aspects of music-making, he landed a job in the studio as an assistant engineer at Cherokee Studios, but his big break didn’t come until the day that Frank Zappa’s regular engineer was held up in London with visa difficulties. As low man on the totem pole, the 20-year-old Chiccarelli was given the assignment to work with the notoriously difficult and demanding artist. Seven albums later, he had a career.

Since then, Chiccarelli has worked in the studio with an astonishingly diversified group of artists, including Tori Amos, Oingo Boingo, Black Watch, American Music Club, and My Morning Jacket. And every album he works on, it seems, sounds totally different from every other album he’s ever worked on.

“When people ask me, ‘What’s your approach to producing records?’” Chiccarelli says
laughingly, “my answer is, ‘Well, what day is this?’ But on a creative level I think I would be dead
if I just made the same record over and over again. The personal challenge for me is to try to
make something that’s unique to that artist.” Clearly, he’s succeeding.

What do you think it was that Frank Zappa saw in you that made him want to continue to work with you?
I think it was because I was very much an open book. At the time, my only experience was in making good, clean contemporary pop records, while Frank’s whole thing was to try the most outrageous things possible in order to make the music interesting and dynamic and over the top. It was a new place for me, but I was very willing to go there. Perhaps he just viewed me as someone who hadn’t done a lot of records and so wouldn’t be as set in his ways or closed to new ideas.

Frank was all about breaking rules and challenging the norm. I learned pretty quickly during my first few days with him that you just didn’t say no. [laughs] He really had a great sense of the big picture. Before I even had a chance to make a statement or try to do things my way, I realized that this was a guy who could see five steps down the line, so I had to learn to trust him and know that in the end it would be okay.

A lot of producers and engineers I’ve talked to have stressed how important it is to be ready when your big break comes. Looking back with hindsight, what preparations had you made to be ready for that moment?
To be honest, I didn’t know where the Frank thing would lead. I was fortunate in that I fell in with an artist who was a workaholic and went from one album to the next. But I didn’t know at the time that this was going to be a break; I thought it would be a very transitory thing, that I would work with Frank for however many weeks and then go back to Cherokee and resume my assisting gig.

In terms of preparation, I’m not so sure that I did anything specific, but the one thing I tell people who want to become an engineer or producer is, “learn everything.” Not just engineering and music, but also learn about art, poetry, literature, psychology. The job really involves a lot of things, and it changes from project to project.

As someone who appreciates good sound, do you ever find it frustrating to work with an artist like Jack White, someone who’s into rough edges? Do you ever find yourself thinking, “if only we could work on this mix a little more we could get it sounding so much better?”
Yes, and there are many times where I will say something just like that: “Give me another half hour and let me fix this and fix that.” But the thing that makes rough mixes good is that you just kind of go for it, as opposed to laboring over it and making sure that every corner is polished and every little detail is in place. That’s why they often find their way onto records, and that’s one of the things I respect about Jack: he’s so much about spontaneity and honesty – the reality of something – that he doesn’t want to spend a lot of time on sounds, on mixes, on anything. Jack is a big fan of old-school recording; he’s the kind of guy who thinks that nothing’s sounded good since 1972. [laughs] But if you go back and listen to a lot of the music from the ’60s and ’70s, the thing that it’s got more than anything else is a feel and an emotion. So I actually think Jack is correct in that things sometimes just get polished to death.

With the White Stripes, my basic role is to capture the performance and protect the energy and the magic that Jack and Meg have. And they’re a pretty powerful combination, I have to tell you. I’ve recorded Jack now with three or four different drummers, but there’s a chemistry between him and Meg that’s unique. They’re so respectful with one another, and they work hard, and they push each other. Whatever people say about her abilities, it’s immaterial, because there’s something that she does that lets him do something very special.

Do you prefer to record digitally, or to tape?
It really depends on the project. When I feel confident that the band has got it down in terms of performances and things will probably be just a matter of a few takes, then I’ll do it in analog. With the White Stripes, we recorded to 16-track analog, which was Jack’s preference.

But if it’s a situation where there’s still some uncertainty as to arrangements and structures, then I would choose the digital approach. Having the Shins project done in Pro Tools was a godsend, because I was able to say to [singer/songwriter] James [Mercer] something like, “You know, it would be wonderful if the chorus happened again at the end,” or “Let’s put a whole new section in the middle with different textures, and let me show you real quickly how it could go.” Working digitally gave him lots of options. For example, there’s a track on the album called “Sea Legs” where the chorus only happens twice in the song, and that was slated for release as a single. But for radio, sometimes that doesn’t really work. So we tried doing the song with a more traditional pop structure, where there are three choruses and it ends on the chorus, and it worked, but we all felt that it was a little too normal-sounding. So we opted to go off on this crazy, quirky, almost Latin jam thing because it sounded really exciting when the song took a big left turn, and that’s the version we used for the album. But when it came time to prepare the track for a single release, we went back and used the file that had a shortened jam section and a third chorus at the end.

Both analog and digital work fine, and they each have their strengths and weaknesses, and their own distinctive tonality. To me, it’s like having another microphone or compressor to choose from. But even when I record digitally, my goal is still to get the sounds the way I want them on the way in. I’ve always taken that approach, and everyone I ever learned from back when I was just starting out took that approach. In those days, you were limited track-wise, so my attitude was, every time you put up the faders to do a rough mix, that was your record, or at least it was 90 percent the way you wanted it. I viewed mixing as a process of balancing and refining, not reinventing, and that’s still my attitude.

What do you think it is that makes a song great?
In any kind of pop song, you want to be able to tune in and tune out at the same time. In other words, you want it to engulf you and captivate you every second of the way, but you also want it to take over your body in the sense that you don’t want to have to work too hard; you want to be able to turn off and just kind of sing along. I think great songs work that way, in that you can view them from afar or be really inside them, just like a great painting or a great movie.

What do you think is the most important quality in a successful producer?
I think the more you are a fan of the music and are moved by it, the better the job you will do with it. And if you are really in love with the music, you will protect the artist’s integrity at all costs, and that’s all-important. Of course, you do need to know a little of the technical side of making records as well as the musical side of it, but mostly you need to be well-rounded as a person. I’m always inspired by people that create works that are long-lasting, in any art form. I think that what we do can sometimes be a very ephemeral thing, and I’m always awestruck by the Bob Ezrins and the George Martins in this business – people who have made records that will indeed last for a long, long time. But I often try to gain my inspiration from art forms other than pop music – painting, or filmmaking, or novels, or great architecture: something that’s been around a hundred years, created by some guy who really broke all the rules. If I go to a museum on a Sunday and I get motivated by some new young painter or sculptor, that’s more fuel for me to go into my medium and try to do the best that I can do.

Buy Behind The Glass, Volume II by Howard Massey at HalLeonardBooks.com.

Read More
Home studio posts – recording tips for producers, engineers, and musicians
Psychology and the music producer
Quincy Jones’ Tools For Success
Behind The Glass with Daniel Lanois
In the Studio with Trevor Horn

12 thoughts on “Behind the glass with Joe Chiccarelli”