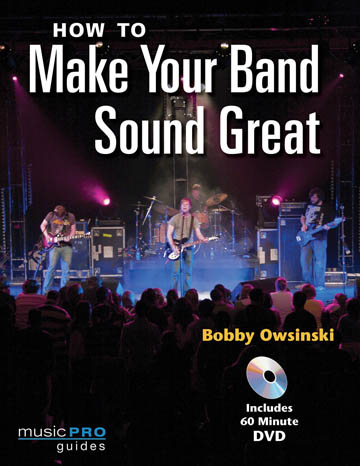 (Excerpt taken from How To Make Your Band Sound Great)

There’s so much to being a guitar player that’s easy. There’s a vast variety of gear to choose from, a host of excellent players in every genre to learn from, and plenty of ways to get you to a place where you can make music quickly and easily. That being said, playing guitar well takes a lot of thought and effort that goes way beyond technique. It requires some dedication to not only do it well, but also do it in a way that makes the rest of your band sound better as a result. Here are all the things to either think about or work on to take your individual playing to the next level and, as a result, bring your band there, too.

Two Defining Moments for a Guitar Player
There are two defining moments that can change an electric guitar player from an amateur into a professional. What I’m going to tell you might be hard to take, because it might go against your idea of what sounds good and is fun to play, but believe me when I tell you that it will help you in the long run.

Defining Moment 1: The day you hear that your sound can be bigger without pedals or anything else between your guitar and amp.

Yes, it’s true. That’s the way it usually works. Most of those guitar sounds that you’ve been hearing on recordings (especially on classic ’60s and ’70s recordings) have been made by a guitar plugged straight into an amp with no pedals (or one at most) in between. What gives it that big sound is the type of amp (like the vintage ones used on many of these recordings) and the fact that it’s turned up pretty high, if not to max!

Let me tell you about when this moment happened to me. I was jamming in a garage with slide guitarist extraordinaire Gerry Groom and a bass player and drummer. Gerry was a protégé of Duane Allman (of the famous Allman Brothers Band) and was so close to Duane that he willed Gerry his beloved Les Paul when he died. The guy really had some amazing chops and a lot of experience and was once dubbed by Jimi Hendrix’ former manager as “the next great American guitar player.” I was no pup either, as I had been playing about 15 years at the time and had a couple of major label record deals (back when they actually meant something) under my belt.

Gerry plugged his 1960 Les Paul Black Beauty into his 1964 Fender black-faced Super Reverb, and the sound was glorious – lots of sustain with some really good-sounding overdrive. I plugged my 1981 Strat into a small rack (which was popular to have at the time) of distortion devices, chorus units, EQs and noise gates, which then went into a fabulous 1977 Marshall JMP 100-watt half-stack. While Gerry’s guitar sang with richness and as much sustain as he wanted, mine sounded thin and buzzy, although just as loud.

After about a half-hour of jamming Gerry looked at me and said, “Why do you even use that crap (meaning my rack gear)? You’d sound a lot better without it.” I loved my pedals and rack gear and the way it made me sound while I played by myself, but I had to admit that his rig sounded better than mine by a mile. He had the sound I kept trying to get by using all the pedals and rack gear, but he got it by using none of it!

I unplugged everything and went straight into the amp, turned it up and… wow! It really did sound better once I tweaked the amp’s controls a bit. I was a little shocked by how high I had to turn the amp up to get the sound, but it really was the sound I had heard on countless records and had been trying to achieve. It was that simple.

But it did take a new technique to learn how to control the amp. I couldn’t just jump on a pedal to get enough volume to go from rhythm to lead any more, I had to do it with the volume control on the guitar. And much to my amazement, it was easy! You turn down the volume control and the sound cleans up; you automatically get some highs in your sound, giving you some nice rhythm definition.

No longer were my rhythm parts heavy handed and too full. Now they were always just right. This was my moment of clarity.

Granted, it really depends on the amp. Most amps will work well, but a few won’t. That’s one of the reasons that guitar players much prefer tube over solid-state amps. Tube amps have the right sound when you turn them up, while solid-state amps, for the most part, just don’t. Likewise, if the amp has too much power, you just might never be able to turn it up where you need to in order to get the right sound, especially if you play in small venues. That’s why a 50-watt amp is a lot more versatile than a 100, because you just can’t drive a 100 to where it needs to go without your audience wearing hearing protectors like you see on an airport flight line.

Now I’m not saying throw away all your distortion and overdrive pedals (because they certainly have their place), but get the sound from the amp first, then add your pedals. If you can’t make the guitar sound great plugged directly into the amp, consider an amp that will get you where you want to go.

Defining Moment 2: When you learn to play clean without the help of distortion or sustain.

This might sound like the same thing as Defining Moment 1, but it’s not. Playing with distortion is fun, but the sustain gives you a false sense of security. The problem is that it can also cover up a lot of mistakes and technique problems that you might have. Distortion and artificial sustain can give you a false sense of your ability, and the way to get around that is to learn to play completely clean.

Yes, you might not like what you hear at first, but with some practice you’ll find that it’ll make you a much better player, because now you can hear all the nuances – the ones you’re doing well and the ones you need work on – that you just can’t hear through the distortion. This is the way you learn and refine them in your playing. If you can sound great clean, you’ll sound even better dirty!

Less is more
Expanding on the above, playing with fewer effects and less distortion helps your band in another big way – it’s a lot easier for you to fit into the mix. The more effects (reverb, delay, chorus, flange, vibrato, and so on) and distortion you use, the harder it is for the audience to discern exactly what you’re playing. This means that the sound of the band turns into a mushy din instead of an exciting mix of instruments greater than its parts.

I’m not saying to stop using your pedals. I’m saying that you should use them with discretion. You don’t need to use them on every song, and you usually need a lot fewer of them than you think. When you’re playing live, if you think of your set as a record or CD (meaning a group of songs released at the same time that are designed to fit together), you’ll notice that the guitar sounds change a lot from song to song. In the studio, this means using different guitars, different amps, different effects – all in the name of keeping the sound fresh. While it’s impractical to do this to that extreme when playing live, you can still do some subtle things toward this end like using different pickup combinations, using different effects in different songs, or using different amp settings if your amp will allow you to do it. But once again, the word is discretion. A little goes a long way!

That’s what tone controls are for
Most players seem to have either questions or a misunderstanding on why and how to use their tone controls, so don’t feel bad if you do too.

First of all, you want to adjust the tone controls so that all the notes of your instrument speak evenly. That is, no note (or group of notes) is way louder or softer than any other.

On a guitar this might sound something like the low end is really too boomy when you play a Les Paul or something with humbucking pickups through your amp setup, but it’s nice and even with a Strat or something that has single coil pickups. Or the other way around where the Paul sounds balanced while the Strat sounds light on the low end. In this case, adjusting either the bass or mid controls on the amp will make sure that all notes are equal in level.

Another situation might be where the midrange is so bright and strident that it tears your head off, but it’s close to the sound you like. In this case, it’s great to have the flexibility of a parametric tone control if available. Sweep the frequency until you find the band of frequencies that’s too loud, narrow the bandwidth until just that frequency is affected, and then lower it. Your tone will remain pretty much the same but the offending frequency will be lowered so it’s balanced with the rest. This is also a big thing with basses, where one note on the neck is so much louder than everything else.

Excerpt taken from Bobby Owsinski’s How To Make Your Band Sound Great is published by Hal Leonard Books/MusicPro Guides. Excerpted by permission.

9 thoughts on “Two Defining Moments for a Guitar Player”